My Weird Family and Technology

I have a sort of love-hate relationship with technology.  On the one hand, my husband and I both hail from the media world and he works for a cable company.  His iPhone is pretty much an extension of his hand.  Witness the fact that at night I often gently slide his iPhone out from his sleepy hand at night before I turn out the light.  (I know what you’re thinking, romantic).  I launched CloudMom last year and am on some sort of screen for much of the day, not just working but figuring out where on Earth everyone in my family is going and how on Earth I’m going to get them there. 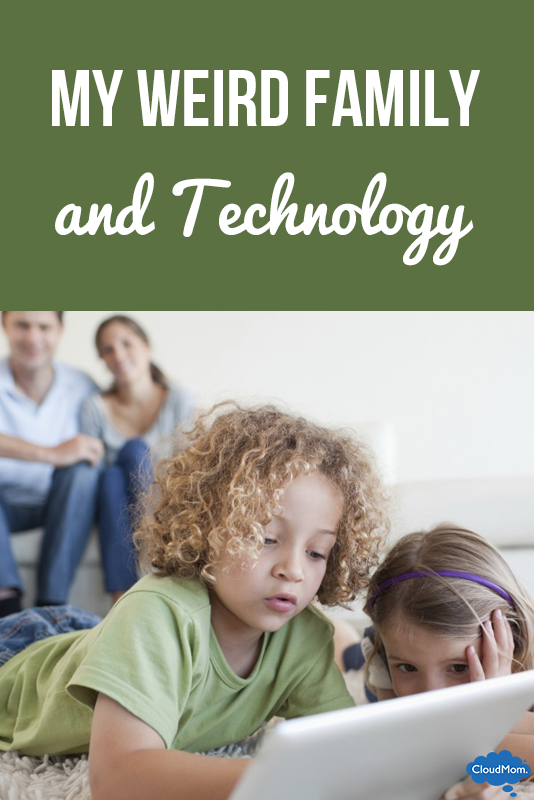 Let’s face it, it’s not just working parents who are glued to their phones, all parents MUST be because there is no other way to keep up.

Our lives are so deeply rooted in technology and yet for some reason, I cringe when I see my boys on iPhones, iPads, even computers.  Totally weird, I know.  Way back when, I for some reason decided that we as a family were better off just saying no to screen time for the kids.  It simplified my life.  Rather than fighting about who, what, and for how long, I just took technology out of the equation.

Turns out that in pretty much eschewing technology, my family is the exception to the rule.  A recent survey reported in the New York Times has revealed that for most families, technology is not a point of contention and that they don’t worry too much about their kids internet use or screen time.

Are these parents the with-it cool parents, while we are that archaic family whose house no one wanted to visit, like the one down the street from me as a kid who had no TV and mandatory baked beans every Thursday night?  (Both their daughters rebelled by the way, and one became a big druggie in High School).

A couple months ago, I had a conversation with a good friend of mine about technology and kids.  Hedley is complaining that he doesn’t know what the other boys are doing, I told her.  My friend was so smart.  She said you don’t have to give it to him all the time, but give him enough to know what is going on so that he doesn’t feel excluded.  Just enough, she winked.

Based on that, we instituted an hour of iPad time on weekends but then that became morphed into a disciplinary method and reward.  When I couldn’t get my boys to do something, or they did something wrong, I would say “ok, blah blah blah or you will lose 5 minutes of your iPad time.”  Why did I do this?  Because we don’t have a lot of technology, and you can’t make food a consequence, I had nothing else to bargain with!

But should using an iPad be considered a reward, or rather just like any other form of play?  Running through my head every day is the fear that we are doing things flat out wrong.  Our world has changed, and technology penetrates every inch of it.  Technology IS our world.  Hasn’t my family been too extreme?

Another mother I chatted with earlier today actually at a picnic said her family puts limits on technology too, but she laughed at how hypocritical we are since our kids see us glued to our phones ALL.DAY.LONG.  Yup, it’s live by what I say, not by what I do.

What I don’t want to lose is all the un-technology related things my kids are forced to do with their time because frankly there is nothing else happening, like running around the house with cardboard swords, making all sorts of little objects out of paper and tape, and playing handball in my den and breaking my favorite light (oh right, not that).  To me, they are so still children in these moments that I don’t want to give any of those moments away to the DS.

And then I have my own burn-out.  I lost my phone last weekend for two days and you know what, it was sort of peaceful.  I liked the freedom of not worrying about keeping up with Facebook and Twitter.  I truly watched my boys baseball games, and truly sat in the hot sun eating soggy French fries with my girls.  I was more in the moment, not thinking “should I post this?”  Without a phone, you feel like you live a singular and not a double life of interacting with others (who are not with you) while you interact with those who are with you, apologizing all the while that you are on the phone.  Doesn’t this whole thing clearly make us all more stressed out?  More stretched thin?

So I’m stumped.  My name is Melissa and I am an iPhone addict, and yet I forbid my kids from using one.  I depend on it everyday and  yet I sort of hate it.

And with regard to my kiddies?  My hunch is that over time, we will continue to loosen up on the technology front while still imposing some limits.  Just don’t quite know exactly how.  What I do know is that the whole discussion will continue to get more complicated with each passing year.

Do you believe in limits on screen time for kids?  What happens in your with your family and technology when it comes to kids and Internet use, video games, and the rest?  Weigh in below.