Hello, moms and dads, and welcome to Week 11 with your baby, and week 11 with my baby, Bracey. In this series, I’m walking through all the milestones you need to be aware of during the first year with your baby and providing tips on baby activities, care, breastfeeding, and bottle feeding. I’ve come up with a lot of this advice through having nurtured five — well, now six — babies of my own, including two premies. My son Beckett was born at 36 weeks gestation and spent 10 days in the NICU and my baby Bracey was born 11 weeks ago today at 30 weeks gestation and spent six weeks there. We brought him home a little over one month ago. I’ve been discussing my ups and downs with breastfeeding and his weight in this series. Let’s first take a look at a full-term baby and what you should be keeping in mind and then I’ll give some thoughts regarding premie babies and an update on Bracey. 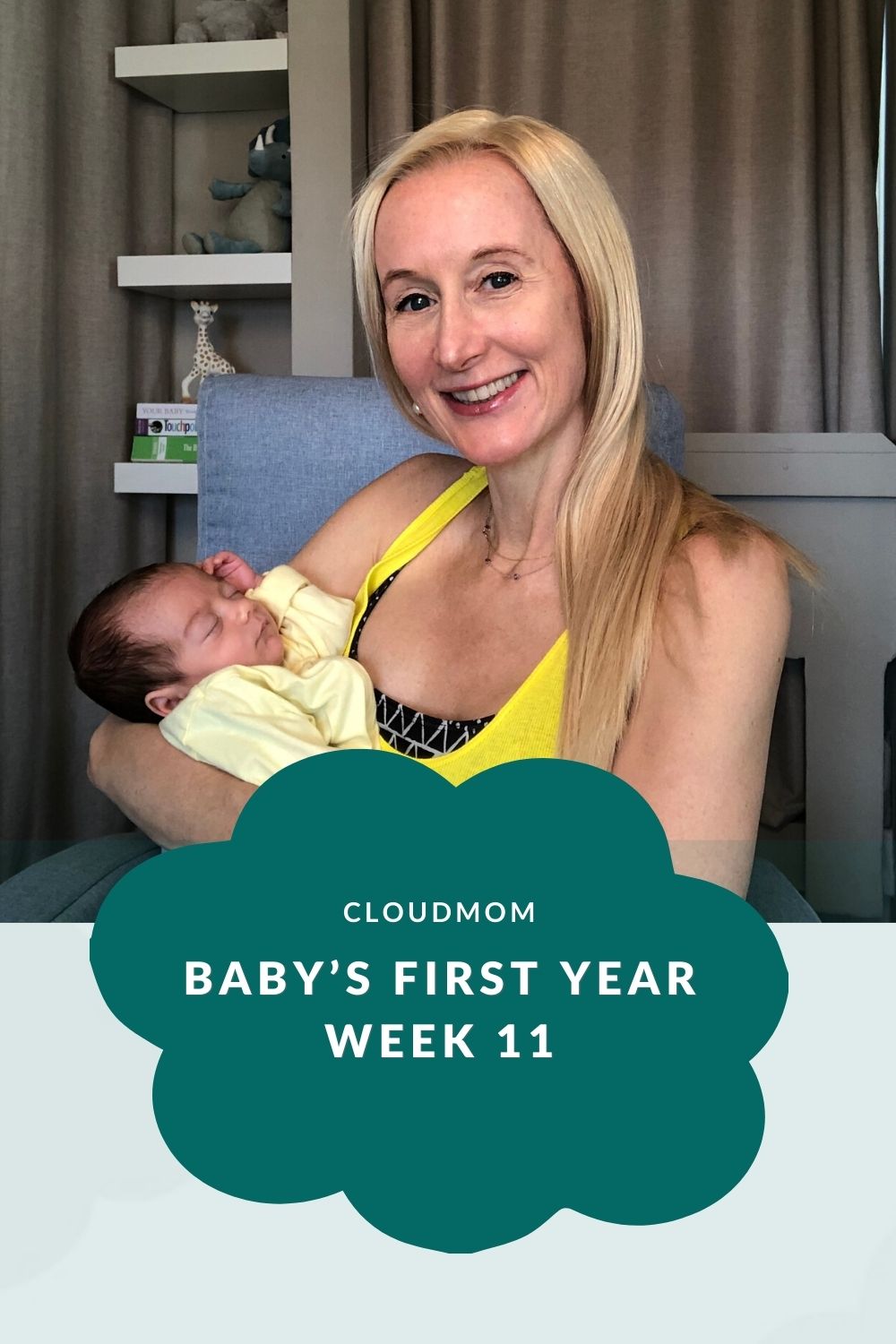 Growth and Development of an 11 Week Old Baby

At 11 weeks old, your baby has likely gained approximately 3.4-4.8 pounds from birth (1.5-2.2 kilos) and they’ve grown about 1.4-2.8 inches or approximately 3.5-7.1 centimeters. Confirm your doctor’s appointment for next week at 12 weeks at which your pediatrician will be comparing your baby’s height and weight against other similarly-aged babies, most likely using the graphs provided by the World Health Organization.

The AAP recommends that infants stay out of the direct sun to avoid long-term risk of sun exposure, and in tandem advises that infants receive at least 400 IUs (International Units) of Vitamin D per day beginning at birth. For breastfed babies, this means giving this supplement until they can take whole milk, which can happen at 12 months. If your baby is taking formula, since all formulas sold in the US have sufficient Vitamin D, additional Vitamin D supplementation usually is not needed.

Guidelines for Iron Supplements for Newborns

Similarly, the AAP recommends iron supplementation for babies during their first year of life.

For full-term babies who are breastfed or partially breastfed, the iron they receive during the third trimester of pregnancy lasts until they are four months old, at which point the AAP recommends a liquid iron supplement until iron-containing solid foods are introduced at approximately six months.

The AAP recommends using iron-containing formula (containing from 4 to 12 mg of iron) from birth through the first year of life.

Premature Babies have less iron from the mother’s pregnancy and require additional iron beyond what they receive from breastmilk or formula. If you have a premie, check with your doctor to see how much iron they should be receiving and during what time periods. Bracey received iron in the NICU and was put on .2ml of iron per day from the day we brought him home.

A common issue with newborns, constipation is exacerbated by iron supplementation. Given that many babies do not poop every day, what qualifies as constipation? And at what point do you need to seek some sort of remedy? I asked my doctor about this and he said if Bracey goes three days without a bowel movement, I should do something about it. Besides the length of time between bowel movements, other signs of constipation are to see your baby straining or turning red in the face, and small, pellet-like poops.

According to my pediatrician, for young babies, there are two things you can do to battle constipation. First, my doctor advised me to massage Bracey in that area using the tip of my index finger with a small, gentle circular motion for a while. If a bowel movement does not happen after trying this several times a day during diaper changes, he advised a glycerine suppository. I was totally freaked out about this, but I popped one in two days ago since Bracey had not pooped in quite a few days. Several hours later some small, dark pellet-like poops came out. This is totally different than the mustard-yellow, liquid poop Bracey had delivered previously. After consulting with the doctor, we put in another supplement yesterday and he had a huge, liquid, mustard-yellow poop a few hours later during the middle of the night. Actually, before that, he had been very fussy all night. We had to change his diaper, pajama, changing pad cover — everything — which became a major cleanup effort, but so be it!

Breastfeeding and Sleeping Schedule for an 11 Week Old Baby

For week 11, I recommend the same schedule until your baby is able to drop the 2-3am feed and then the 10pm top-off feed. In my experience, the way you get the baby to drop these feeds is by continuing to feed very regularly every 3-3.5 hours during the day. I noticed with Bracey this past week that he slept for two five-hour stints at night on days during which I was really disciplined. Yesterday I tried to sneak in a yoga class after his doctor’s appointment and went 4 hours between feeds and he made me pay for it by waking up every 2-3 hours all night long. Thanks, Brace!

Try to pump for 10-15 minutes after every feed or at least after the morning, mid-morning and 4pm feed. The first two because you will have more milk and the afternoon feed because, like me at this time of day, you might have less so you want to stimulate more.

Guidelines for Freezing and Storage of Breast milk

Let’s review the guidelines for freezing and storing breastmilk. On a shelf at the back of my fridge, I keep that day’s pumped milk (which I am accumulating in separate bottles since you cannot add the breastmilk you have just pumped to previously chilled milk), the supplements I add to one bottle a day as prescribed by my doctor (iron and Vitamin D, as explained above), breastmilk storage bags and a pen. After every time I pump, I put the new, fresh breastmilk on the left hand side. When I have enough to freeze (usually over 6 ounces, although I try for 8) I freeze a bag and put it with the milk from this month in a drawer of my freezer. On the right hand side of the same shelf in the fridge, I have a bag of frozen breastmilk. I take this bag out in the morning and I let it slowly defrost. Once defrosted, the milk from this frozen bag will last for 24 hours so I have one day to use it. If it’s still frozen and I need to give it to Bracey, I put it in lukewarm water until it dissolves and then pour it into the bottle, which I then warm in my bottle warmer, making sure not to overheat it which destroys the milk’s properties. The reason I go through all this — and you should too — is that you want to be giving your baby your oldest frozen breastmilk and freezing your freshly pumped milk so that you are cycling through. It is better to give a baby freshly pumped milk rather than frozen, but if you have the frozen and are primarily breastfeeding from the breast, my doctor said to administer the oldest milk so that you make sure to not waste what you have pumped.

How do you Freeze Breast milk in Storage Bags

First, write the date on your storage bag in ink that will not smudge. Next, wash your hands thoroughly. Rip off the top of the bag and open in. Hold it open in one hand and pour your breastmilk into it with the other, while standing it up on your kitchen counter. Fill to desired amount (you might want to freeze in smaller amounts depending on how much your baby is eating), leaving room at the top of the bag since the freezing process will cause the milk to expand. Place in freezer next to milk of the same vintage.

For How Long Can Pumped Breastmilk be Stored

Now, here are the rules as outlined by the CDC.

Bracey did well this week and seemed more like a full term baby — that is, he seemed fussy! He attended his pediatrician’s appointment without complaint, weighing in at 160 grams more than he had the prior week or 3.080 (nearly 7 pounds). Getting past 3 kilos seems to be a big milestone, or at least it did to me. Part of me wanted to stuff a bottle into him beforehand but I did not have time so apart from a few droplets of breastmilk, this was pretty much a real weight. My pediatrician was happy. We asked about constipation and got the advice I set forth above, and also asked about Bracey’s dry, scaly skin, for which my doctor prescribed a popular cream. All in all, we seem to be on our way with our little boy. Thanks so much for watching and see you back next week.

Centers for Disease Control and Prevention