This post is sponsored by Yo-kai Watch: The Movie and The Motherhood.
Hello everyone and welcome back to CloudMom. With all the business of the school year and after school activities, I’ve been looking for some family friendly movies for us to see. Yo-Kai Watch: The Movie is the first English-language film based on the global Yo-kai Watch phenomenon, and features the voice talent from the hit show airing on Disney XD. The anime film will air on one day only, October 15, 2016! 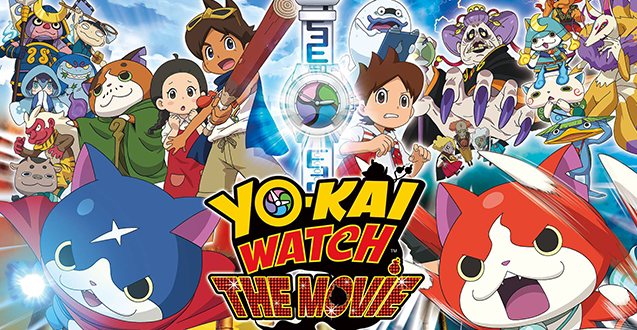 You might not be familiar with anime for kids or be asking yourself, what’s the film about? Yo-kai Watch is a cross-media universe, following the hilarious misadventures of an average human boy, Nate Adams, and his involvement with the mischievous Yo-kai (invisible beings that are the cause of life’s daily annoyances) all around him. Our young hero obtains a special watch, empowering him to discover and summon the mysterious Yo-kai, befriend them and then work together to solve everyday problems… problems that are often caused by other trouble-making Yo-kai!

The film follows Nate Adams and his Yo-kai friends, Whisper and Jibanyan, as they’re transported to the past to help Nate’s grandfather, Nathaniel, battle evil Yo-kai and invent the Yo-kai Watch. Yo-kai Watch: The Movie Event also introduces a new Yo-kai — Hovernyan, a floating blue cat who is Nathaniel’s heroic companion.

Don’t miss the opportunity to check out a fantastic anime film with your kiddos.  Go to the Fathom Events website for local screening times and ticket purchase.  Yo-kai Watch: The Movie Event attendees will have a chance to receive a limited edition Hovernyan YO-MOTION YO-KAI MEDAL, while supplies last.

You can see Yo-kai Watch: The Movie at Union Square 14 on Saturday, October 15, at 11 a.m., and have the opportunity to win fun Yo-kai Watch prizes. Check out all of the Hasbro Yo-kai Watch toys, take your photo with Yo-kai and play fun games!

Oh, and for some extra fun, plus the chance to win one of five $50 Visa cards, attend the Twitter party on October 13 at 1 p.m. ET, noon CT, 10 a.m. PT.  Make sure to use the hashtag #YoKaiWatchMovie to participate during the hour of the party.

This post is sponsored by Yo-kai Watch: The Movie and The Motherhood.