I don’t like being judged for the decisions I make in my life, so generally, I’m the kind of mom who tries hard not to judge other moms. 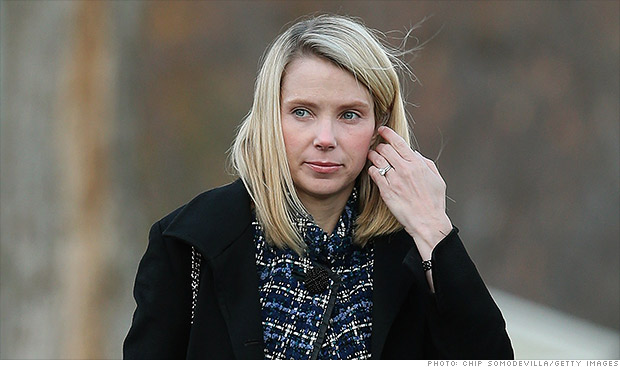 When Yahoo’s new CEO Marissa Mayer (who made news as the first pregnant CEO of a Fortune 500 company) announced last spring that she wouldn’t be taking much maternity leave, I tried to put myself in her shoes and imagine how much pressure she was under trying to turn Yahoo around.  She’s trying to say to Wall Street, “we’re serious,” I thought to myself.  I did one of my daily vlogs — which were taking place in my bathroom at that point, where I wouldn’t wake up my sleeping baby — and said, listen guys, this is a particular situation, let’s cut her some slack.

Several months later, Marissa started to get to me, though.  After her quickie maternity leave, she did an interview saying her baby was “easy.”  My patience grew thin.  I wrote another piece saying Marissa Mayer’s easy baby was hard on other moms.  Where was I as I wrote this piece?  In my laundry room, where I keep my computer, which is right next to my baby’s room.

Well, here we are now, Marissa, you and me, babe, and this is round three.  The news that Yahoo employees will no longer be permitted to work from home, announced through Yahoo’s human resources arm, leaves me totally baffled, angry and frustrated.

As my heroine, Lisa Belkin, quoted in an articulate HuffPost piece earlier today, the word came down as follows: “Speed and quality are often sacrificed when we work from home,” says the memo from HR director Jackie Reses, and reprinted by Kara Swisher on allthingsd.com last night. “We need to be one Yahoo!, and that starts with physically being together.”

Here’s the thing.  I’m not a Yahoo employee (clearly); I work for myself.  And so far, I’m not running a Fortune 500 company (ha)… however, I am a mom of five with a babysitter and a supportive husband and over the past eight months, I have launched and run a whole little video content company from chez moi.

EVERY. SINGLE. BIT. WAS DONE FROM MY HOME.  I shot the videos in my home, I worked on my bed and in my laundry room, I did conference calls and held meetings while my kids busted in the door complaining, fighting, or whining (or wanting a hug!).  I work as a part of a close team with several other part-time working moms, all working from home.  We are no farther away from each other than if we were together in an office, because we have these little things called cell phones — duh! — and an instantaneous messaging program called email — duh! again.

I don’t know how successful my company will end up being long term, but I know that working from home is what made it happen.  With young kids, I never could have spared the time of the commute into an office each day, nor the time getting ready to be presentable!

When I worked as corporate lawyer, by 7:30 a.m. I was showering and getting ready, taking the train, and getting settled for a work day that began at around 9:30 a.m..  Now, I take care of my kids in the early morning and then plop myself down with my computer at home at around 9:30 a.m., and start to do my job.  I don’t look nice, and I not wearing a suit nor anything close, but who the hell cares?

While the new policy seems to be aimed at workers who have arrangements to work from home on a full or part-time basis, even those who might experience a sporadic schedule hiccup have been warned. “And, for the rest of us who occasionally have to stay home for the cable guy, please use your best judgment in the spirit of collaboration.” Huh?? What does that even mean? So, I’m not a team player if my kid gets the flu, if my sitter cancels at the last minute, or my toilet overflows? Should women like me — I know there are some at Yahoo — now leave their jobs because they can’t even stretch things by working from home from time to time for a day or two when an emergency comes up?

So I’ve been there with you Marissa, trying not to judge, admiring you for being tough and resilient, but now, I have to judge your decisions because were I now at Yahoo, I would have to LEAVE because I couldn’t survive as a mom and worker in at atmosphere like the one you are creating. There are just too many small little things that come up all the time rendering a mom’s flexibility crucial.

Let me be blunt: I think you are clueless as to what a lot of moms’ lives are like.  And I think you are wrong because I think that by denying flexibility, you will lose good people, maybe even great people.

I hope you will listen to what people like Lisa Belkin are saying — they’ve been studying and writing about these issues for years and are, I’m sorry to say, more in touch with the daily realities of most hard working moms than you seem to be.

So that’s it from me.  And I’ll end with a question: if your baby is sick, and your babysitter calls in sick too – just imagine that there is NO other backup on the horizon — and you need your salary to pay your mortgage — how would you feel if you had to officially take a day off rather than work from home?

What do you think of Yahoo’s work-from-home ban?  Comment below and weigh in!  I really want to hear from you!

Wow, this makes me so angry! I used to work at a company that wouldn’t let me work from home if my child was sick. It sucked. With today’s technology, there’s no reason companies can’t offer some flexibility.

Hi Nancy — I think she’s just totally out of touch! It makes me mad too. Thanks for commenting!

Yahoo is an internet company who’s whole basis of BEING is communication via “not being there in person.” To ban this seems ridiculous. Not just because it’s simply not true that people are faster and better if they are in a workplace, surrounded by other people who like to yak and drink coffee and interrupt, but because it’s basically saying, “Yes, we do this, but we don’t believe it really works.”

So they are selling a product that they think makes people lazy and incapable of actually getting anything done? Way to sell it Yahoo!

Tami, really great points! I know I get more done at home when I’m not distracted by other employees and the water cooler, and I certainly benefit from the lack of a commute!! M