Home » Mom » Why One Mom Chose Paris Over Her Kitchen

Why One Mom Chose Paris Over Her Kitchen

Growing up with a Mom from Sweden, my favorite time of the year was summer when we would go back to visit her family.  For my mother, traveling with her four rowdy, loud kids was frequently embarrassing and often tough. But she understood that these trips were perfect for making memories with her family that would last for years down the road.  I recall bike rides with our cousins, savoring my Mormor’s tea cakes, and assembling snails on her porch in the evening, and walking to the local store to buy over-sized chocolate bars (something that would never fly back home).  In light of my own childhood travels, Jennifer Coburn’s newly released mother-daughter memoir, “We’ll Always Have Paris”, struck a chord with me.  So I was delighted when Jennifer agreed to do a guest post for CloudMom and to offer two books to our readers!  Read on for more on Jennifer’s story. 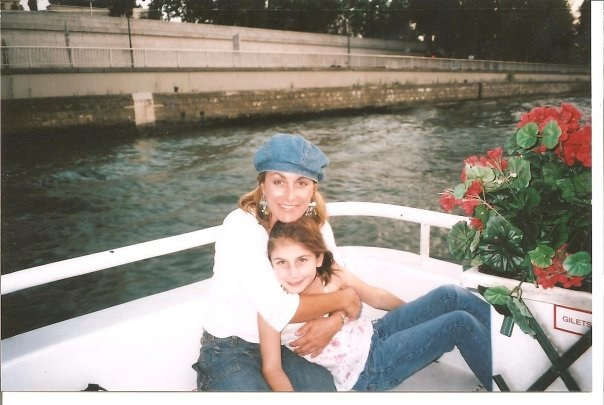 When I told my husband William I wanted to take our eight-year-old daughter Katie to Paris, he gently reminded me of a few things. Both of our bathrooms were in serious need of repair. In one, we couldn’t use the shower because the water leak would further damage the sinking floor, which was covered with a board. Our forty-year-old kitchen looked like it was straight off the set of The Brady Bunch, complete with a mysterious metal appliance attached to the aqua blue Formica splash wall. (No one has ever figured out what this thing is or does, but some have guessed that it was once used to cook meat.) Our oven had two temperatures: hot and off. The dilapidated louvered windows let in more air than they kept out.

And yet overseas travel was, somehow, where I thought I should invest our limited funds.

I know why, of course. My father died when I was nineteen years old. He was forty-nine, and after years of getting high with fellow musicians, lung cancer finally did him in. Since my father’s death in 1986, I’ve been checking my rear-view mirror to see if the Grim Reaper is tailgating.

My anxiety was great, although there really was no rational reason to fear my early demise. I always got a clean bill of health at my doctor visits. And I lived a different lifestyle than my father did, one that incorporated sleeping through the night, abstaining from smoking, and eating vegetables.

Still, I feared that I might meet the same fate as my father and never live to see fifty. And if that were the case, which would Katie remember more: a trip to Europe with me or beautiful tile work in our kitchen?

I wished I could have the perfect home and overseas travel – and while I’m dreaming, I’d also love a closet filled with beautiful clothing and stylish shoes. But my reality involved choices, so I started listening carefully to what Katie brought up as important and memorable to her.

When Katie was seven years old she asked if I recalled the time we visited New York and got splashed with dirty puddle water by a taxi as we were leaving the Metropolitan Museum of Art in the midst of a rainstorm. Wasn’t that fun? Later she asked if I remembered our visit to Aunt Bernice in Florida, and how the Fourth of July party in the retirement condo “great room” looked like an explosion of red-white-and-blue Mylar. And wasn’t it hilarious when Auntie’s friend’s teeth fell out while he was dancing the tango? These were Katie’s memories. Never once did she mention our ugly kitchen.

So I began saving my pennies and earning frequent flyer miles by charging absolutely everything on a credit card that earned points on my airline. My plan was to jam-pack Katie’s mental scrapbook with beautiful memories of us walking hand-in-hand through the sepia-toned streets of Paris, stopping to listen to an accordion player whose monkey in a red beret begged us for tips. We would ride bikes, me holding a baguette, Katie a red balloon. We would see a mime and find him charming.

One of my best friends has the exact opposite priorities. Her home is such a showpiece that a presidential candidate chose to host a fundraiser there. She is perfectly turned out and has a wardrobe straight off the runway. When her husband offered her the choice between a trip to Paris or a Rolex for her birthday, she took the watch. I told her she was crazy, but she was just as sure it was me who had it all wrong. She said families could create memories anywhere, and that her trip to Paris would be over in ten days. The watch, however, would bring her a lifetime of pleasure. There are no right choices. There are only our choices. And for mine, I’d take Paris.

Eight years after my first trip to Paris with Katie, the kitchen is still a mess, but we’ve managed to take four long trips and visit 12 European cities. My now-17-year-old has seen Michelangelo’s David, the home of Salvador Dalí, and live theatre on the London stage. We’ve been swindled in Rome, played charades with locals in Pompeii, and sang Korean folk songs at the Alhambra in Granada. But more important than what we were able to see in Europe was what we saw in each other during our travels. I saw that Katie finds the goodness in every situation. I learned that I could read a map after all. We both realized that we are far more adaptable than we ever imagined. And we have memories that will last a lifetime.

We may never have the funds to remodel the kitchen and I’m okay with that. Our shoddy old oven burns a lot of food. The windows still don’t close properly. And the countertops are still that groovy shade of aqua blue. But Katie and I, we’ll always have Paris.

Sold wherever books are sold, Jennifer Coburn’s travel memoir “We’ll Always Have Paris” chronicles mother-daughter adventures through 12 European cities over the course of eight years.  A USA Today best selling author of six novels and contributor to four literary anthologies, Coburn has written for Salon.com, Creators News Syndicate and The Huffington Post.  Coburn lives in San Diego with her husband, William, and their daughter, Katie.  Follow Jennifer on Facebook.

Great story! The same way I felt when I finished school and wanted to take my son on vacation to Florida. I would rather have a fantastic memory of our time together than anything else at that time. I’m so glad we took that trip!

In 2009, i was homeschooling my then 9 year old son and signed up for Cosmetology school myself. We worked on his schooling and activities during the day and I went to my school at night. We did this for 19 months. Finally I was done and had some money in the bank so we decided to take a trip. We drove from TX to FL and spent a whole week at Disney World visiting all the parks. Then we drove to Ft Lauderdale to spend another week visiting family where we spent many days and evenings at the beach. We snorkeled, played in the sand and looked for seashells. We got to visit our favorite ice cream parlor, Jaxson’s. We even got to drive to Miami to go to the zoo. On our way back north we stopped in St Augustine to visit my aunt and uncle and their son, who was the same age as my son. We had a blast at the beach, hotel pool and at Ripley’s museum. We got to take a harbor tour and saw dolphins and a lighthouse. Then we drove back home to Texas. It was a wonderful vacation where we could all reconnect after me being in school. It is a time I hope my son never forgets.

I’m sure he won’t! Thanks for writing in Kelly! xo M

About 5 years ago my father in law and my 3 grown daughters grandfather passed away. We decided to drive straight thru from California to Indiana for the funeral. The four of us had a great time together even though we were going to say goodbye to a loved one. One of my favorite memories was when we were caught in a traffic jam next to a semi truck that was carrying sheep. We were moving foot by foot so we decided to talk to the sheep. BaaaBaaa. That went on for 1/2 hour. Boy, were the other people in the traffic jam mad at us. That was just one of the many happy journeys I have had with my daughters and grandkids.

you sound like someone who knows how to make the memories. God bless. xo M

My son is still really young but an adventure we shared was flying to Virginia Beach for a getaway. I never would’ve gone that far but I won a free trip through my work. It was so much fun, riding bikes, going to the waterpark, playing in the ocean, taking a dolpin cruise. I look forward to many more adventures with him.

I went to Virginia Beach once and it was beautiful.

As nervous as I was, taking my 2 yr old son on a helicopter ride last summer was an amazing experience. He had so much fun and was in such awe that my heart was leaping the whole time!

wow, that is truly an adventure!

My adventure was with a granddaughter instead of one of my children, and it was a road trip. Just the two of us when she was five years old.
I took her to my home state of NC so she could see the places I’d lived as a child and where I graduated high school.

She met some of my closest old friends and relatives she’d otherwise have never met.
We took lots of pictures and made a trip album for her when we got home.

She’s a teenager now, and we still like to go through the album together and remember things that happened.

what a wonderful story, thanks for sharing!