Sobbing at My Daughter’s Doctor Appointment

As the mother of five kids, sometimes I think I’ve seen and done it all, but yesterday I had a new experience as a parent, and not a good one. I couldn’t stop myself from breaking down in tears at my four-year-old Annaliese’s doctor’s appointment. 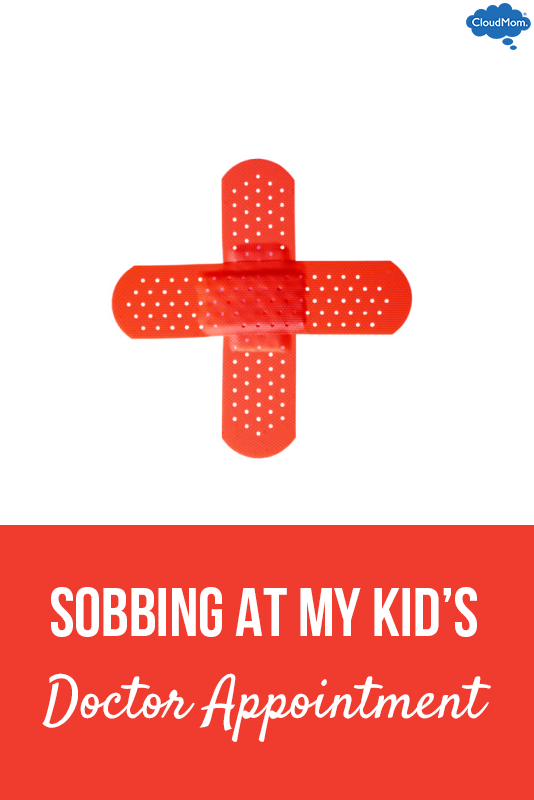 Let me preface this by saying, for any of you who have not read my blogs before, that I really am not an angry or mean type.  I actually don’t feel a lot of hostility in my life. I have other problems, certainly — anxiety, frustration and feeling constantly overwhelmed among them — but anger, hostility? Not so much. Until yesterday, that is.

One of the few New Year’s resolutions I have yet to break is to get my butt in gear in terms of the kids’ doctors appointments. So I made an appointment for Annaliese with an allergy specialist to make sure that some recurring rashes and inflammations are simply a skin condition and not a more serious allergy or reaction.

The appointment was scheduled successfully — yay for me, right!?  Not so fast.  First I had to have the records from Annaliese’s other doctors sent over.  This is harder than arranging dinner with the president at the White House.  Three phone calls.  Four emails.  Two confirmations.  Two hours of time sunk into a wasteland, which led to insomnia related to the other 300 things I had yet to do.

When we arrived at the doctor’s office at 8:15 a.m., I was barely dressed and depleted after a restless night.  And BINGO. They don’t have our records!  “Our office manager doesn’t arrive until 10am,” the man behind the desk said unhelpfully.

So I started filling out the 16 FORMS.  Yes, I counted them. 16 FORMS.  Could these possibly be put into one document so that you don’t have to repeat the same information again and again and only sign your life away once?

I hadn’t scratched the surface on the paperwork when we were called in to see the doctor.  Now another disclaimer:  I generally love doctors.  I hail from a family of truly awesome doctors and I’m the only non-MD of four siblings.  My babies were brought to the earth healthy by awesome doctors.  I don’t care if they’re busy.  I don’t care if they’re late.  I love doctors, hospitals, and the entire medical profession.  But i did not love this one doctor I met yesterday for one simple reason: she made me feel like A HORRIBLE PARENT.

Here’s a little play-by-play of the appointment:

Doctor: “This is a food allergy clinic, please don’t eat here.” (I take away Annaliese’s bread and milk. Stupid of me).

Doctor: “Could you please sit over here so that I can see you?”

Me: “Okay, no problem.” I move my stuff and sit across from her and away from my child, who then predictably wanted to sit on my lap.

And then the questions started. When did Annaliese first have symptoms?  How long did they last?  Did you ever treat with a steroid? For how long? What steroid was it?  Did you use an inhaler?  On what dates did these episodes occur?  Was she ever in the ICU?  When?  (I can’t remember what year, let alone what month).

No smiles. No, “maybe you can remember.” No, “I can check the records.” I felt like any moment she was going to say, “You are her mom, right?  This is your child?  You sure?”

I tried to explain that I had the records sent over so the information would be available, but by that point I was crying and telling the doctor that it’s hard to memorize every appointment date and treatment when you have five kids.  But on the inside, I was thinking, “Maybe I should have kept better track?  I should have a file.  I should have MY OWN COPY of the records.  Why don’t I remember?  What’s wrong with me?  I shouldn’t be a working mom. It’s too much.” And on and on.

If there is one sure way to really hurt a control freak like me, it’s to accuse her — directly or indirectly — of a lack of organization.

She asked Annaliese if her rashes were itchy, and my little one nodded yes.

“Does she tell you that they itch when you don’t ask her?” the doctor said, turning to me. Annaliese frowned as if she knew the doctor was telling her that her word doesn’t count.

I ask the doctor to step outside, expressing my concerns about whether all this was going to make Annaliese upset or make her think she had a big problem, and was told most parents aren’t worried about that. Annaliese started crying in the doctor’s office because I left her alone there. Now, we’re both crying.

“If you’d like to reschedule and see another doctor at another time, we can do that,” the doctor said.  How sensitive!

Somehow I lifted myself up and waded through her questions, but we weren’t done yet, because it was time for the bloodwork, which any parent knows is torture for a toddler.

We walked into the little room with a television and several needles were sitting there already, so of course Annaliese started crying again. I asked the nurse to try to take the blood quickly and by that point, I had gone into Mommy Lioness mode. No more tears. “Annaliese this is going to be so quick and Mommy’s going to be so proud of you and we’re going to have a big hot chocolate with whipped cream.”

The needle was up but no blood was coming out, so the nurse adjusted the needle and Annaliese cried even harder.  She kept poking around with the needle but then gave up.  “Maybe you would rather go downstairs?” she said. “They have more people.”

This is now MY choice?  I am choosing to take her somewhere else and have her subjected to this again?

So we returned to the waiting room where I resumed filling out the 16 forms before heading downstairs. The sweet office manager settled down next to me.  “You don’t need to fill out all those forms,” she said, when I’m about done with form #16. “We already have most of that information.”

So, at the end of all this, the blood did get drawn,  Hello Kitty band-aids were applied, and we headed home.

I’m still a little shaken by the whole experience, to be honest. I have no practical advice to offer here other than to say you should never let anyone make you feel like you are a bad parent, no matter what you forgot or weren’t able to do.

Oh, and one more thing.  On our way out, I told my baby that she is just the best.  “No Mommy,” she said, “the whole world is the best.”  After all that, this little girl LIFTS ME UP.  Now then, that is the essence of a child.

I can understand why you’re were upset. I had my experience with allergist for myself and they’re not the most compassionate doctors in my opinion. Some are out right arrogant. Let’s say I didn’t schedule another appointment with that doctor’s office again. Whatever power trip that doctor was going through has nothing to do with your mothering skills. If the records was at the office, maybe she would of been nicer but that wasn’t your fault either. Seems like Annaliese is a strong, brave girl and it seems like she forgot all about the ordeal which is good. All you can do is the best you can, everything else is out of your hands :).

you’re a great mom Melissa, don’t let the doctor’s attitude cause you to doubt your mothering ability

Thank you so much, Lily. That means the world to me!