When Toddler Throws His Cup

Hola Moms!  Several weeks ago, we reached out to the Plum Organics and CloudMom communities and asked for your take on what to do when your toddler throws his cup.

You guys came back with so many great ideas that we had to write them up.  Check out our original video on what to do when your toddler throws his cup! 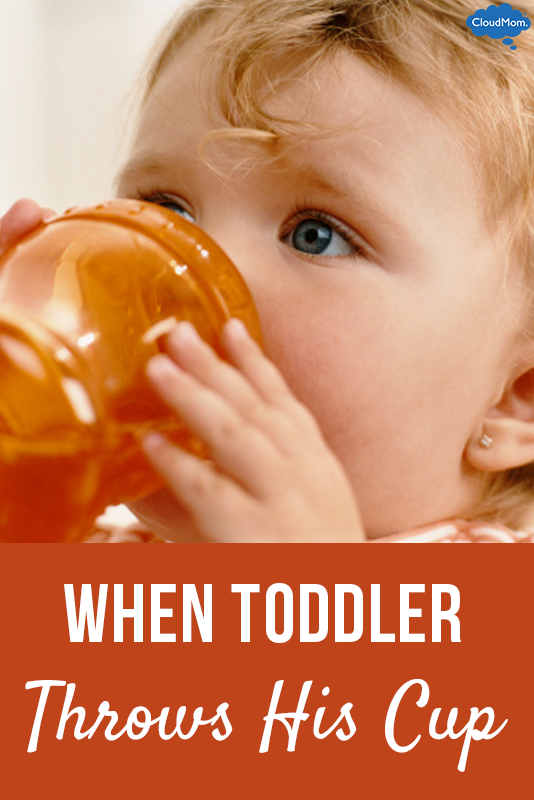 There were three schools of thought (forgive the bad pun):
Those who say One Strike and You’re Out

When a toddler throws his cup, many of you agreed with me and said just don’t pick it up and give it back.

Molly writes that her 16 month old has thrown his cup so many times, that now with one toss, it’s bye-bye cup.  She happily reports that after a week, Mr. Cup now stays on the tray.

Nicole Miller agrees, her toddler doesn’t get his cup back until the meal is over.

Courtney is on board with this: her little one only gets to “launch” the cup one time – great word Courtney, since that cup does take off like the space shuttle.

Liz K points out that when her toddler throws his cup, it usually means that he’s finished.

And Mama J (love that name) says it like it is: “leave it there until he learns.”

Next up to bat were those who thought one more bite at the apple is okay.

Stef will pick up the cup once and give it back to her baby!  But if he bats that cup out a second time, game is over.

Diva 1981 reminds us to stay come and not overreact.  She’ll pick the cup up once but that’s it.

Shobana will give it back a second time too.  Similarly, Amanda and Tanya Lewis will issue this one-time warning.

Chelsea Lasure will pick it up once and tell her child “we don’t do that.”  If her child throws it again, she won’t pick it up and if she gets fussy, she’ll say “you threw it on the floor.”

And finally, Stars2Moon will give her baby a second try, but if he throws a fit, she ignores him.

Finally, our third team is a bit more forgiving before drawing the line.

Andrea V writes that she struggles with health problems, so learning to pick up her son’s objects can be painful.  (We hope you are feeling good today, Andrea!).  Andrea has a “three strikes rule.”

Heather moves the cup out of reach.  She’s hand it back a few times, but after that she concludes that her child is no longer hungry.

Patty is trying to get some learning out of this whole experience.  She tries to encourage her child to say “all done” and “no” and then to help him put the cup in the sink.  She also has a dog lurking around, which is not helpful because the dog is looking for stray bites!  Patty has her toddler help clean up thrown food after a meal.

All in all, a wealth of FAB tips from you guys.  Here are the most popular ones:

1)   Stay calm – don’t laugh, don’t get upset, don’t give your toddler any reaction.

2)   Be firm and consistent – have a plan and stick with it.

3)   Throwing a cup can indicate your toddler has had enough to eat.

4)   Having a toddler help pick up thrown food can be a good learning lesson.

5)   Combining hungry dogs with a toddler eager to throw food can be a fatal combo!  Sorry dog lovers!

Thanks for all the super feedback!  Xoxo Melissa

Thanks for commenting – We have picked a winner!

My daughter is a little older now (2 1/2) but when she was younger and threw her cup we would leave it on the floor until dinner was over, then she would have to pick it up and put it in the sink.

I pick the cup up once. If it goes down again it stays there until the meal is over. Of course, if it seems that it was an accidental drop, then we still pick it up for him.

I’m trying to decide if i’m in the one or 2 strikes group. My daughter is not quite a year, so she is really still learning. But i don’t want to give in, either!

Just don’t make it into a game. Then it’s never ending!

My daughter will purposefully drop her cup. She does not throw it… yet. If she drops it on purpose it stays out of her reach. If she was trying to put it in the “right spot” (on the table or on her tray) I will give it back. But she does usually signal she is done with her drink or food by dropping it on the floor.

My little one is learning how to use a cup and thinks dropping it is great! So I found a “Sophie leash” on etsy that also holds cups. The leash can be attached to the highchair. It is great for taking to restaurants too!

If she throws it while she is in her chair, we take it away until after our daughter’s meal. If she is just roaming about, we don;t worry about it. She will pick it up when she wants more.

My son is 22 months old, he often throws his sippy’s when ever he gets the chance!

When he does this I kindly pick up the cup and ask him “is that what you are supposed to do with your cups?”

he usually replies “no” and I then use that time to put the cup away and tell him when he can stop throwing his cup he can have it back, until then I’m going to put his cup away.

that does the trick everytime and he usually doesn’t do it for the REST OF THE DAY!
I use this trick with his toys, and any other objects he likes to hurl across the room 🙂

My 17 month old likes to throw his cup out all the time. Usually we try not to make a big reaction because usually that’s what he wants. When he throws his cup we will usually pick it up and wait about ten mins to give it back. If he throws it again he does not get it back.

The trouble I had when my son was younger was that I wasn’t always sure if it fell by accident or on purpose. He liked to set his cup on the edge of his high chair tray, so oftentimes it would just fall by accident. I would pick it up for him once, but after that, he wouldn’t get it back. Now that he’s older and out of the high chair, if he drops it (by accident or otherwise), he’s the one who has to pick it up.

If it’s an accident I pick it up and return it to the child. If it’s intentional, I either get the child down from the chair and make them pick it up themselves or they don’t get it back until after the meal is over. This is not a game this mommy wants to play! 😉
Thanks for the giveaway, Melissa!

I like to think that baby needs to learn by the things hes doing. I let him throw it. I tell him that it’s not nice, and I leave it there until he or I think he needs some water, after a long enough period that it isn’t a game. It really hasn’t become a huge issue thankfully.

When my 15 month old son throws his cup, I will pick it up one time and give it back to him. But second strike and you’re out! 🙂 We are working on having him pick up anything, including his cup, that he throws and then put it away where it goes. It’s going well so far and I’ve noticed he’s throwing things less and less.

So excited to start cups,, what would I do without cloudmom!

One strike and the cup is gone!

I would pick up the cup once, but that;s it, Anymore and she will not get it back!