What Really Makes Us Parents Proud

Hello everyone.  We’re basically crawling our way towards the kids’ Spring Break here, with only a few more days to go.  I’m so much looking forward to some relaxed family time and not having the rush of homework, activities, early bedtimes and sports.  Today’s little blog is about pride, something I thought about a lot last week, during which we had one of family “ups” as well as one “down.”

There are so many moments in our lives as parents during which we feel flat out crummy.  Your toddler screams when you won’t buy her the pink unicorn in a store, one boy takes a stab at another in public and a stranger nods her head in disapproval, and then of course you loose your patience and yell.  Yup.

And then there are those moments we were just feel proud.  PROUD.  I’ve been asking myself lately: what is pride?  To me, pride is an emotion that fills your soul.  It is one of the joys of motherhood. Doubts, concerns and anxieties fade and your entire brain is swimming in a state of sunny satisfaction.  You study your child and think: how can I have been gifted this miraculous, gorgeous little being?

Two moments in our house last week made me feel decidedly not proud and PROUD.

For the first, one child announced to me the night before a test that he, well, had a test.  All weekend long we’d been hanging around his school watching Varsity basketball games.  It was a lot of fun admittedly and he didn’t want to miss all that.  Who can blame him?  But when this child told me at 8pm the night before his test that he had a test (something he had known on Friday but “forgot”), I was SO put off.  What I should have done is said, “well, you did not prepare.  Now go to bed and let the chips fall where they may.  If you don’t do as well as you want to, that is because you did not prepare, and therein will lie the lesson.”  My husband TOLD me to say that but I didn’t.  Instead, I stayed up with him and studied and quizzed him for two hours.  During those weary hours I scolded him, told him I was exhausted, and treated myself to a white wine spritzer.  Yup.  It was not pretty.  I wasn’t the best mom that night.  Between my admonishments (which cost us too much time), we discussed water processes around the globe.  To add smoke to the fire, I was missing Downton Abbey.  Not kidding.  What bad timing!  Kids can be really cruel.

Two days later said child comes home and tells me he got a good grade on the test.  Now, we’ve had plenty of bad grades, believe me.  Yet I was not proud.  In fact, I was peeved.  After all my reprimanding on the importance of being prepared, I had swung in as damage control and helped him avert disaster.  When I think about how to be a better parent, I realize that I denied my child a valuable life lesson.  A poor grade would have been right – not a better grade due to Mommy’s rigorous help at the last  minute.  So he got the grade, but was robbed of a valuable life lesson: the value of working hard and getting your act together.

Contrast this to how I felt the other day when Lachlan my 9 year old son won a special award for being the Most Improved Player on his recreational basketball team.  Last year, Lachlan said disliked basketball and this year, we had a battle over whether he should play at all.  I realize in retrospect that he didn’t dislike basketball; rather, he just felt like he wasn’t good at it and therefore, didn’t want to play it as much as soccer.  “Soccer is my sport, Mom”, he kept repeating.  How natural it is for us to reject what we don’t feel competent doing.

Basketball is in our family blood.  Never one to give up easily, I cajoled Lachlan to keep at it, and he did.  Somehow, he found his stride this season.  In the shooting area, we still have some work to do, but Lachlan is dogged.  He’s a ball-stealer.  He GOES FOR IT.  He doesn’t give in.  He gives it everything he’s got.  HE TRIES.

I was drowning in pride.  And the reason is pretty simple: my kid had tried really really hard at something that was hard for him.  When you weigh 60 pounds and are under 5 feet tall, hurling a basketball into a hoop is hard! 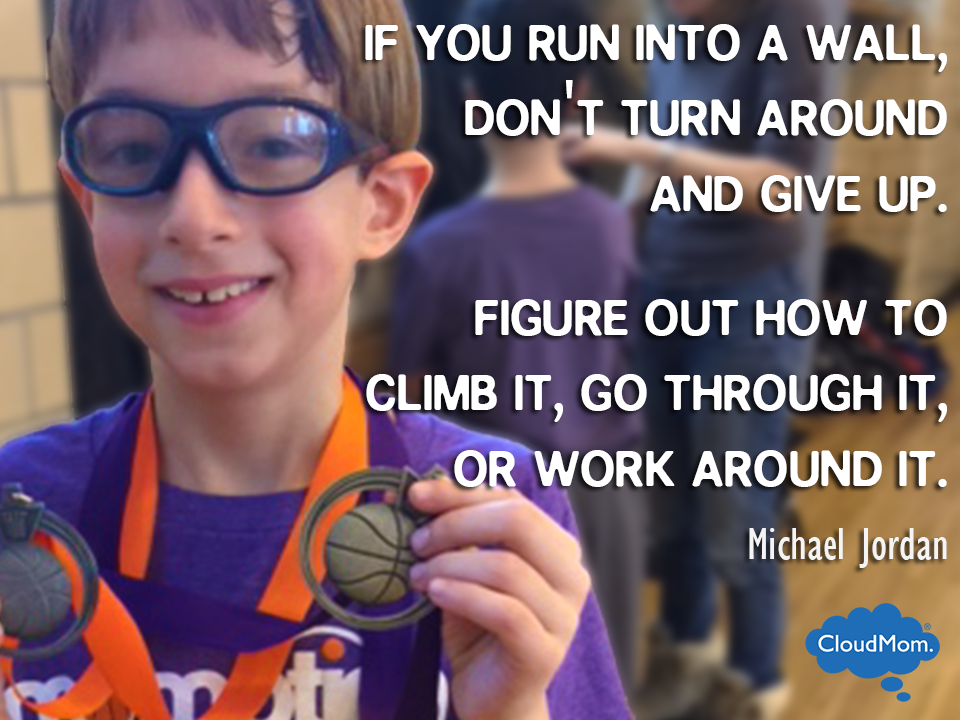 So one child got the life lesson.  He’s learning to never give up. When that process of stride is there, regardless of the outcome, you gotta feel good as a parent right?  Because the person who really tries ends up getting somewhere.  Maybe not where they intended to be.  But somewhere pretty good.

What makes you feel proud as a parent?