When you strip away the unfortunate decision to kill off Matthew Crawley in last night’s finale of Season 3 of Downton Abbey, the episode is really about the importance of positive parenting. 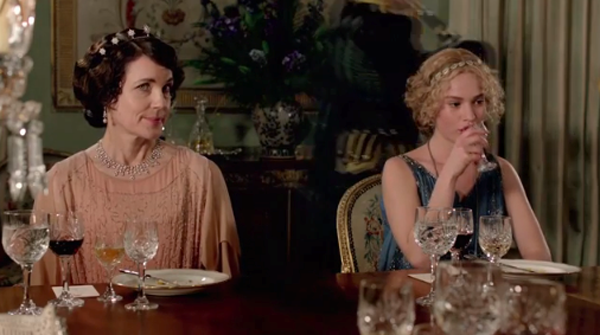 We are brought up north to visit the MacClares – Cousin Shrimpie (clearly a sexual metaphor for a man castrated by his wife’s vitriol), wife Susan and daughter Lady Rose – at Duneagle Castle. There we meet the Grantham family’s diametric opposite – a miserable house where both upstairs and downstairs, sour beratement triumphs over encouragement and support.

Contrast Lady Grantham’s gentle urgings towards Mrs. O’Brien with the demanding scorn of Susan MacClare over her maid Wilkins.  Susan asks Wilkins to style her hair like Lady Grantham’s, whom she wants to be like, the hair being a metaphor for a happy woman.  Don’t we all want to copy people who seem happier than we are?

But when Susan isn’t pleased with the result, she makes this clear at the ball by praising Mrs. O’Brien’s hair-styling skills at Wilkins’ expense, humiliating her.  Wilkins responds by trying to reap revenge by secretly filling Mrs. O’Brien’s punch glass with whiskey, which O’Brien shrewdly refuses.

You don’t have to be a psychologist to appreciate what’s going on here.  The negative reinforcement – telling someone they come up short rather than empathizing with their situation and positively encouraging them to get to a goal (the tenets of positive parenting) – has nasty consequences.

Here the relationship was between an employer and employee but it mirrors and mimics what happens on the show between Susan and her daughter.

Why Downton Abbey is a Lesson in Positive Parenting

Just like the maid Wilkins, Lady Rose MacClare is the unhappy recipient of her mother Lady Susan’s bitter discouragement!

And again another contrast between the two families: when Rose descends the stairs for the ball in a fashionable new dress only to receive the bitter scorn of her mother, the Countess Dowager intervenes to empathize and explain how when she was young, she too favored the day’s fashions.

Violet: “Well, heavens!  That’s not a word you often hear among the heather!”

And this one’s even better:

Susan: “Rose, you are not wearing that dress, and that is final.”

Violet: “Oh, my dear, in my time I wore the crinoline, the bustle, and the leg-of-mutton sleeve.  I’m not in a strong position to criticize.”

We love the Countess Dowager for her humor but what’s really special about her is her practice of compassionate parenting (or in this case Aunting!)): her empathy and understanding towards the younger generation.

And what is the end result?  Stuck in their miserable relationship, their estate lost due to bad management, the MacClares are cast off to India, while Lady Rose will find a new home with more positive and encouraging parents at Downton.  At least Susan was able to recognize that she was so damaging to her daughter, she best step aside.

The message for us parents is clear: find a way to empathize with your children and support them in their journey or you risk alienating them (even losing them) completely.

I’m devastated by what happened to Matthew, but to me as a parent, this was the bigger lesson last night!

And to you guys?  What did you think about Downton Abbey’s finale?  Comment below!