The Royal Baby Name & The Choices We Parents Face

Yesterday brought the big news that The Duke and Duchess of Cambridge had chosen to name their brand new baby boy: George Alexander Louis. 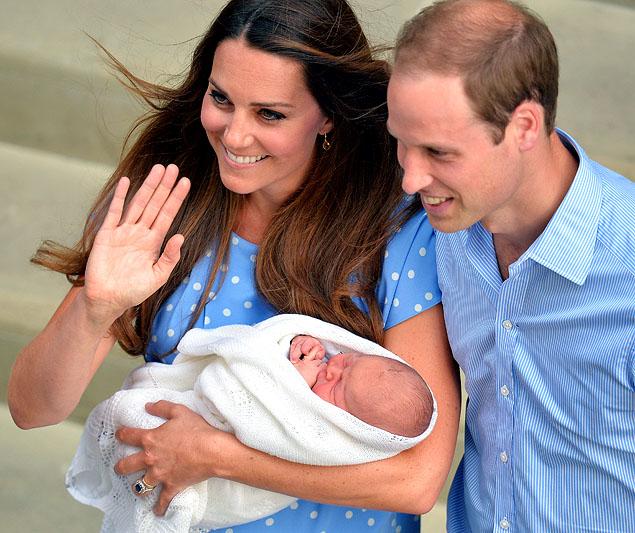 During repeated television appearances yesterday, commentators like the historically astute Victoria Arbiter on CNN explained the historical significance of these three names.  George is the Patron Saint of England, and a popular name for Kings of England. Queen Elizabeth’s father was King George VI. Meanwhile, Alexander pays tribute to Queen Elizabeth herself, whose middle name is Alexandra; it also nods to Scotland, where the royal couple met, which has had three kings named Alexander. Finally, Louis honors Louis Mountbatten, Prince Charles favorite grand uncle, who was assassinated  in 1979 by the IRA.  The royal baby will be known as His Royal Highness Price George of Cambridge.  (Some are speculating that for a nickname, he might be Alex but Arbiter insists that George is a trendy name in England and that George will be George!).

So Kate and Will stuck with tradition and honored the royal family’s history.  But, as Arbiter also pointed out, they also broke with tradition in choosing three rather than four names for the male heir.  Shocking! Arbiter also mentioned that she suspected the royal couple had gotten the approval of Queen Elizabeth during her meeting with the royal baby on Tuesday.

Clearly, the royal couple is operating under a special set of circumstances here, most unlike what most of us experienced.  Yet the whole issue brings home to what extend any couple with a new baby, royal or not, needs to balance tradition and family expectations with the desire to establish a new family’s identity.

Turning away from the royals, I’m interested in what your story is.

How did you go about naming your baby?  Did you pay tribute to family members?  Did you feel pressure from family regarding your baby’s name and how did you handle that?

For what it’s worth, here was how we grappled with these issues and what and why we named our kids.  Some viewers have been asking this for a while, so I guess I’ll use this discussion of baby naming to get into the nitty gritty.  Forgive me if that appears to be taking on royal airs!

Especially with our first, our baby’s name was a point of discussion among family members and friends! For some reason, I thought having people weigh in was a good idea.  I learned that it wasn’t.  I think that you tend to like what you like, and that others’ views are not going to change that, they are just going to make you feel less happy about your ultimate decision!

We were thinking of Oliver until up to the last minute, when Marc proposed the name Hedley.  Hedley had been the name of a man Marc admired, but did not know well.  A close friend told me it sounded like a cheese, and my family said: “Why don’t you just name him Henry or Harry.”  For weeks after Marc proposed the name, we argued, back and forth, back and forth: Marc wanted Oliver, I wanted Hedley.

When our little boy was born, I knew that he was Hedley and Marc did too!  But we waited to tell family members until the birth certificate application was signed, sealed and sent off because we didn’t want to be convinced otherwise.  After 6 months of organizing polls for my baby’s name, I was done!

So in that sense, we went against what seemed to be our family’s wishes (although the pressure was nothing like what the royal couple is under, and my savvy Dad stayed OUT of the whole thing).  We found other ways to include our beloved families in the baby’s name.  We honored Marc’s Dad Herbert with the H is Hedley’s name.  Then, we paid tribute to our family by choosing the middle name James.  James was my Grandfather Jack’s second name, my Dad’s second name, and is also my beloved younger brother’s first name.  And this started our family tradition: we choose a first name we liked, often with a first initial from Marc’s family, and then choose second names for all our children that paid tribute to family members from both sides.  Five little ones later, here is the round-up:

Lachlan Jack — L is for Leah, Marc’s Grandmother, Jack for my Grandfather (my Dad’s Dad, Jack).

Beckett Liam — B is for Marc’s Mom, Beatrice.  Liam is the Scottish form of James.

Annaliese Rose — Rose was Marc’s Grandmother and Leah was his Grandmother.  Anne was my Grandmother, and we found Annaliese to be a nice combination of the two Great-Grandmothers.

Marielle Fleur — Fleur is my mother, and M is a popular name in Marc’s family, as both his Grandfathers names were Morris, and he and his brother Michael both have M names!

Thus we opted to choose modern, first names that we loved, and pair these with traditional family middle names.  Part of me thought, too, that if the kids didn’t like their slightly different first names, they had the option of using their middle names.

How happy was everyone around us?  I found that as soon as those beautiful babies were home, their names became less important and everyone just focused on the joy of the new addition to the family!

Did you opt for family names, or did you choose new names?  Did you feel pressure from family in choosing the name?  What names did you choose and why?  Please share the story of your baby’s name below in the comments!