New mom Kim Kardashian recently lashed out at a follower on Twitter for criticizing her for not spending enough time with her baby.  Here’s what Kim wrote:

“[You] sound so ignorant. Bc I don’t tweet or instagram my every move w my daughter means I am not with her 247?” Kardashian tweeted Saturday.  We share what we want. Or is it bc I go support my fiance at every show & I post pix? When the baby goes down 4 bed or a nap, parents are allowed 2 work & support each other. Maybe even have fun too.” 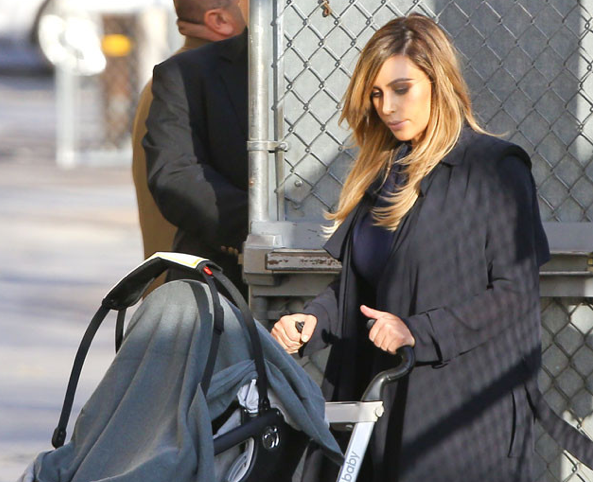 I try hard not to judge other Moms — even Kim Kardashian — so I won’t fault her parenting but but I can find fault in her social media strategy.  I explain why in today’s video.

For starters, rather than lash out defensively, why not just provide some evidence of her positive parenting moments, like her tweet about taking her baby North swimming for the first time?

Also, in today’s video, I talk about how dramatically motherhood changed my perspective and my self-image.  Things that I was so insecure about before, such as my looks and clothes, mattered less to me once I was focused on another person.  This could well be the case with Kim.  And I think people are hoping to see some signs of such growth and change.

Yet despite what personal changes she might be going through, it doesn’t seem that motherhood has changed how Kim wants to portray herself.  Rather, Kim seems to think the world still wants to see her all gussied up and sexy at every turn.  Maybe that’s plain wrong.  Maybe people want to also see a cute, modest moment with her baby.  She could do that without exploiting her baby.  All she has to do is sit on a sofa with yoga pants on vegging out with her baby like any of the rest of us and presto, an image folks could relate to.  Just sayin’.

An image or two like this could help Kim portray herself like a decent parent spending time with her baby.  An angry tweet?  Not so much.

For more on my take on this issue of Kim Kardashian’s parenting style and her social media style, watch my video.

Then, tell me your thoughts on the latest from Kim Kardasian?

Kim Kardashian has always been judged no matter what stage in her life she is in. As a first time mom myself,my whole world and life has changed,and even have sacrificed many outings with not just my husband, but with friends as well for the following reasons.. I’m strictly breastfeeding and don’t feel comfortable doing it in public.. I feel like I have partied enough in the past few years that I am in a place now where I can stay home with my family and enjoy every minute of my little girl without feeling like I need to be out somewhere else.. Also, one thing that I have had an issue with and am and dealing with is the fact that I haven’t been able to lose the baby weight fast enough therefore I can relate sometimes with those moms who are on the same boat as me who look at people like Kim Kardashian and other celebrities who within 3 months lose all of their baby weight and of course some of us are quick to judge the unfairness of it because we are regular people who don’t have the means celebrities have to hire extra nannies or personal trainers or a nutritionist or chef to help us with the process of losing the baby weight that quick . and Kim Kardashian’s case I feel like she is famous for looking the way she does and of course she has to maintain that image without the flaw of being overweight.. However, I do feel like since she is a first time momthat she should probably show a little bit more of that motherhood in her to the public since she is making that public image and that’s why fans question her because she shows nothing but what she does when her baby is not around and I do respect the privacy that she wants with keeping her little girl out of the spotlight,but I also think that fans judgefor doing that because like I said she is a public figure and they expect her to share that part of her life with them as well

We pretty much are totally on the same page. I’m not saying she has to do anything. I’m just saying that because she shows nothing of this, you can understand that people might misinterpret her priorities…