Ipad Baby Seat—Good Idea or Not?

Hi, everyone! Melissa here with a hot story about a controversial new product by Fisher Price called the “Apptivity” seat. This seat, which can be found on Amazon and sold for about $75, has created such a buzz with parents that I wanted to go ahead and address it in today’s vlog. The Fisher Price Apptivity Seat resembles a standard infant seat with dangling objects, but it also features an extended arm that holds an iPad for a baby to watch as he/she relaxes in their seat. The fact that an infant can now be entertained by an iPad has upset a number of people, and I have to admit, I understand why. 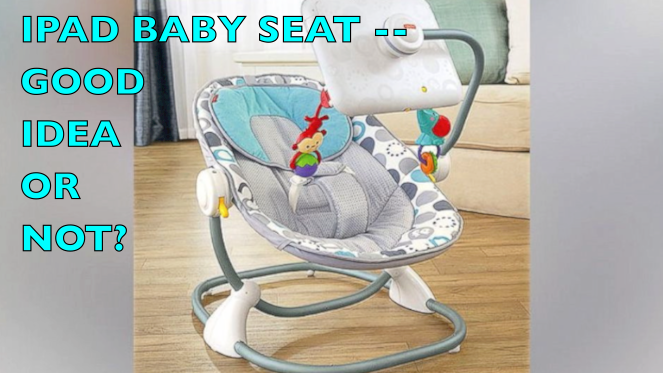 Should babies watch TV or not?

The American Academy of Pediatrics explicitly states that children under the age of two should not be exposed to television or digital screens, so I am not a huge fan of this new toy based on that recommendation. My own doctor also warned me that babies and technology aren’t such a good mix at that young of an age, so I think this really made me wary of how much exposure my little ones were getting.

As a mom, I always struggled with finding new ways of entertaining my children while they were under the age of one. Experts agree that babies need conversation, they need to be interacting with adults and making eye contact, they need physical affection, and they need to be interacting with toys and real world objects during this age.  What they don’t need is to be plugged in and sucked into watching television.

Fisher Price, I LOVE your products, but I have to say this is one that just isn’t for me. I would be too worried that I would be tempted by it as an easy way to entertain my kids and would overuse it. It hasn’t been perfect, but I’ve tried to find activities for infants that would keep my babies happy without the help of digital technology, including activity mats, wooden blocks, and all sorts of common household objects like mixing bowls and wooden spoons.

To hear more about why I’m not a huge fan of this new Fisher Price infant seat, make sure you check out my vlog! Parents, what do you think about this new Apptivity seat?  Do you think that this is something you would buy, or do you disagree with it?  I want to hear all of your opinions, so please share how you feel about it in the comments below!