Home » Mom » One Mom’s Appearance on The View

One Mom’s Appearance on The View

Hello, my friends.  I met comic Karen Bergreen through my oldest son Hedley (our boys are friends).  She is one of the most hilarious comics around, so it’s been a thrill to see her career develop as our boys grow.  Karen appeared on the View last month, and I asked her to write a blog post about her experience as well as on the role that comedy plays in her life as a Mom.  Enjoy! xo M 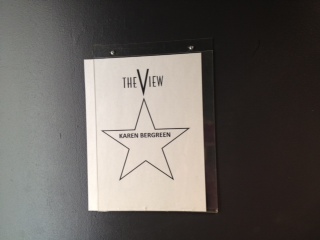 I started doing stand up comedy–long before I had kids. I was a big fan of Seinfeld at the time and did my own version of observational comedy. My career was moving at a nice pace: I traveled a lot, I had a development deal at HBO, and appeared on quite a few TV shows. All of a sudden (if you consider 9 months ” a sudden”), I had a baby and then another. My observations weren’t funny to me anymore. And you can’t do comedy if you don’t think what you are saying is funny. I felt creatively washed up. I didn’t have the flexibility to develop my material on stage, and my existing jokes fell flat for me. I was depressed.

How Motherhood Made Me Funny Again

Not only that, all the TV shows and magazine pieces at that time tended to portray motherhood as stressless joy. That wasn’t my experience. My babies wouldn’t sleep, I was a terrible swaddler and everything scared me.

One day, I went on stage and without thinking, I just started complaining about my kids. I was slightly embarrassed: the lines weren’t jokes per se. I was just talking about my life. I can’t even remember if I got laughs, but it made me feel better. I kept going in this direction.

Soon, Moms and Dads came up to me after the show thanking me for telling the truth. And, as my kids developed personalities and I started meeting lots of crazy moms, the joke well never dried up. Since then, most of material has focused on parenting. It’s better than therapy — for me and my audience. I actually teach moms stand up comedy and give motivational talks on the importance of maintaining or developing creativity when you have kids. This is especially true for stay at home moms who may not have any kind of outlet outside the home. Laughter is an amazing stress release–not just for the audience but for the comic as well.

My Appearance On The View 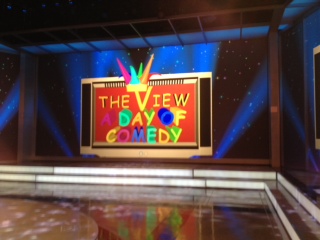 I have watched The View since it first aired in 1997 — so it was surreal for me to be on the show as a guest. I was completely nervous to perform in front of Barbara Walters — I felt as if I had been sent to the principal’s office, but she was actually quite lovely.  The other co-hosts were great–I know Sherri from the NYC comedy club scene; Whoopi treated me like an old friend, and Jenny McCarthy gave me these cool gel things you put under your eyes to make the circles go away. They were all so nice. I was surprised by how attractive Bill Geddie was. I must have told him that he was handsome at least 17 times.

Their snacks are terrible — if you want good food, do a show on The Oxygen network. 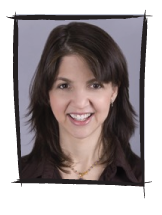 Karen Bergreen, a nationally recognized stand up comic, has appeared on Comedy Central, Nick Moms, The TV Guide Network, House Hungers, the Joy Behar Show, and Law & Order.  Karen has been invited to perform twice at the HBO’s U.S. Comedy Arts Festival in Aspen, Co and The Great American Comedy Festival at the Johnny Carson Theatre in Norfolk, Nebraska.  Karen has written two comic novels, Following Polly and Perfect is Overrated, which have earned praise from The New York Times, Oprah Magazine, and her mother-in-law.  Karen is a frequent contributor to The Huffington Post and More Magazine.