There’s been a lot of talk about older parents lately, and it’s certainly struck a chord in my family. 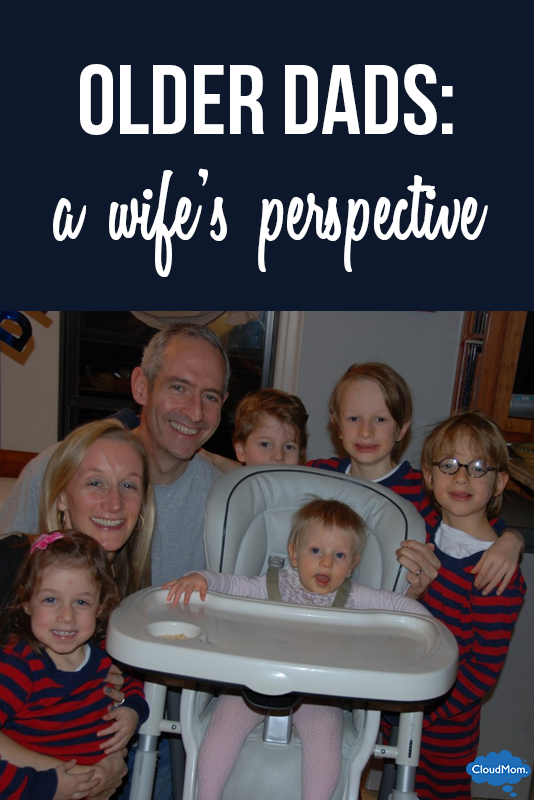 Most recently, Judith Shulevitz writes in the New Republic about “the grayest generation” and the implications of “old-age parenting” on American society. As Lisa Belkin notes on The Huffington Post, Shulevitz examines the risks associated with this trend — the negative impact on reproduction,  an aging work force, the potential health risks for children of older parents — and concludes that the way to reverse this trend is through better work-life balance to encourage couples to have children earlier.

On an intellectual level, I find her piece fascinating, but as a member of one of those older-parent households, I know that our choices didn’t have anything to do with larger societal concerns. I would imagine that each story of “old-age parenting” is as unique as the parents themselves — here’s ours:

Let’s talk about age gaps in marriage. My husband and I are 15 years apart in age; he’s in his mid-to-late 50’s, I’m in my early 40’s.  And we have five children aged eight and under, the youngest being only 2-years-old.

I know what you’re thinking.  How old is that dad going to be when that baby goes to college?  And let’s not even venture into the marriage and grandchildren territory, thank you very much.

I think along the same lines all too often.  When you’re married to an older man who is also a dad, your mind often skips between all the delightful, family times of the present to the unknowns of the future: will he be there for this, will I be alone with all of these kids for that?  If I’m alone with all these kids, how will I manage?

Fortunately for us, New York City obscures our situation somewhat because we are surrounded by other older dads, but once we step outside, boom!  We get the looks, the comments, and all the rest.  It isn’t once or twice that a fellow camper asked a child of mine if his dad was his granddad.  Ouch!

At the same time, we also have experienced many of the benefits of older parenting.  When my husband and I had our first child he was in his late 40′ and was at the ready!  His career was established, and although he works really hard, he is 100 percent there for his kids when he’s home: playing baseball, teaching them about music and politics, and, yes, playing on the iPad from time to time.

He’s completely committed, settled, and knows who he is, and he adores and appreciates his kids too.  I can’t tell you how many photos and videos my husband has taken of the kids, but I can safely guesstimate the number  to be around 50,000 (to my dismay and frustration, only two finished albums… apparently, appreciating the moment does not entail printing!).  That’s coming from someone who knows that the now is not forever.

Luckily, my husband’s also active and healthy.  But even so, I know sometimes that it’s hard for him.  I can see the look in his eyes at 4 p.m. on Saturday when he really wants to take a nap and the kids are climbing the walls.  Sometimes I even get annoyed because how on earth am I supposed to do it alone?  And then I feel guilty — it’s not his fault!  He arises every day at 5:30 a.m.and works like a dog, and on the weekend, no down time: zero, zip, none.  Is this the dream of most men his age?   Some are talking retirement and time-shares!  My husband is (hopefully) going to be in the rat race for a good 15-20 years more so we can get these babies soundly off on their way.  It’s a lot of pressure, to be honest.

In a sense, I think I’m in denial of my husband’s age. I come from a large family with incredible longevity.  My maternal grandparents lived to 95 and 96 years old, paternal 93 and 95.  At 73 and 79, my own parents are the youngest and healthiest people for their age I know. They socialize, swim in the ocean, travel and enjoy the best of life.

But what if this doesn’t happen this way for us? Even though I try to maintain my eternal optimism, those scary thoughts sometimes creep in and terrify me.  Because the thing is, the whole growing old theory is a bit different when your husband is 15 years your senior.

I’ve had friends ask me why I chose to marry and have kids with an older man, with all that comes with it.  I didn’t choose to marry an older man.  I fell in love with him and there was no question to either of us that we would spend our lives together. Shulevitz mentions how recent medical studies indicate that babies born to older fathers are at higher risk of autism and schizophrenia (thankfully, not our situation as of yet), but that wasn’t on our minds when we decided to have children. I think if we worried about all the inherent risks that go along with bringing a child into the world, no matter your age, none of us would have kids!

So there we are.  Plenty of comfort, love, delicious moments and gratitude on my part mixed with frustration, fear and anxiety.  I wouldn’t change my family’s situation for anything, but I pray to God every day that we’re in it for a long time to come.

Thanks for writing this. My husband is 18 years older, also in his late 50’s, I’m in my early 40’s, and our twins are 3.5. I feel I could have written this exact post, so I completely empathize with you. The main difference is that you have 5 kids. That’s a lot of kids and I think anyone, young or old, would be exhausted by them at 4pm on a Saturday! You both are doing great. Happy holidays to you and yours.

Thanks for that.. I am not quite that old, turning 37 this year, and my wife is 10 years younger than me. We’re just starting our family within the next year and it is the same with me.. I simply wasn’t ready for a family prior to now.. it wasn’t a conscious choice or a selfish “I want to be free” thing either.. it was just life.. that’s how it was and is.

I have many of the same thoughts, even though I am considerably younger than your husband, about how I will relate to my children and them to me when I am 60+ and they are just becoming adults themselves… we will cope I’m sure.. but I think about these kinds of issues regularly.