This one is for all the awesome working moms out there. Ever since she stepped up to the helm of Yahoo and announced that she was pregnant, Marissa Mayer has been saying the wrong things to and for moms. Her latest misstep was saying to Fortune Magazine last night that her 2-month-old baby Macallister has been “easy.”

When she announced her pregnancy in June, Mayer stated that she would be back in the office after just a few weeks, thereby stirring up a hot debate as to whether or not she was setting a bad example for working women by not taking a longer maternity leave. Back then, I tried to be patient and recognize the fact that Mayer was a newly pregnant woman with a high-pressure job and had little idea of what was coming once that baby was born. 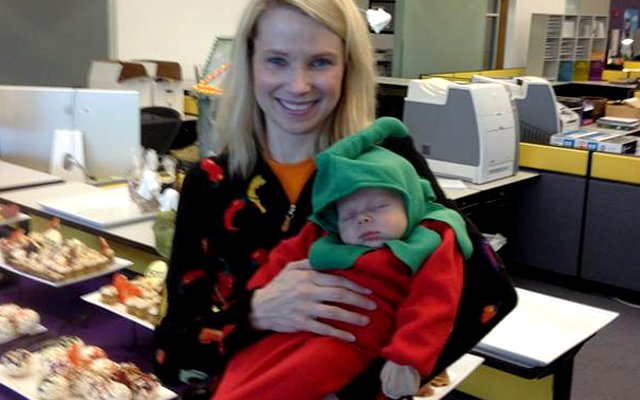 But now, I’ve lost my patience, because I can’t believe after that last firestorm that she said something like this again!  Her most recent statements are even more insensitive to the situation of most moms, and frankly made me grimace.

“The baby’s been easy,” Mayer said at an event where she was being honored as one of Fortune’s Most Powerful Women. “The baby’s been way easier than everyone made it out to be.  And I think I’ve been really lucky that way … he’s been easy and that’s been a terrific surprise.”

So, Marissa, here’s what I think of what you said:

1)     It can’t be true.  I’ve had five babies (yes, I’m pulling that card!) and even on the best of days, not one baby could ever really be described as an “easy baby”.  I’ve had good eaters and sleepers and burpers, but taking care of a newborn requires constant attention over the 24 hour period.  What possibly is easy about that?  Even if you have a lot of help, which you must, don’t you worry constantly like any other mother about how your baby is doing?  Is he eating enough? Is he sleeping enough? Is he pooping enough? Is he still breathing at 2 a.m.?

2)     It’s downright insensitive.   Babies come in all shapes and sizes and present new challenges with each passing day.  Some have colic, some have gas, some don’t eat enough, some seem to wake up too early from their naps and want to eat all day long.  Saying your baby is easy is frustrating and even hurtful to the legions of other moms, working in and out of the home, who are struggling to handle their baby with their other obligations.

3) It side-steps the issue of how you yourself are balancing work and family, which was the question at hand.  The interviewer was really asking how you’re managing as a new mom in such a huge job, not whether or not the baby himself is easy or not.  How are things, really? The postpartum period?  Getting up for a 12-hour day when you’re bleary-eyed from night feedings?  Even if you have help, I can’t imagine that you’re not exhausted and this hasn’t influenced the way you see working while mothering.  The way you see the world, even?

I know you have a company to run.  You want to appear strong, invincible even.  Got it.  But minimizing the realities behind having a baby is only going to put that seed in certain people’s minds that maybe women don’t really need time away from work to recuperate and learn how to care for their babies or flexibility in the workplace when they return.

The most popular video on our new site CloudMom is a breastfeeding and sleeping schedule for a 2 to 4-month-old baby.  This tells me something.  This is the stage at which the constant feeding of the early weeks is hopefully lessening, but the exhaustion is catching up with you and you’re grappling to get a hang of taking care of the baby and incorporating that infant into your daily life.  This is exactly the age your baby is, so you might have some struggles on your hands soon. I know I did.

Oh, Marissa – I wish you all the best and I am proud of you as a fellow mom, but when you speak, try to remember that you are not just speaking for yourself or your company.  Like it or not, you are speaking for moms and women everywhere. Real moms and real women who could only dream about having an “easy baby.”

These are bold statements, Melissa, but I agree with you on most of what you said. As a mom and a woman, she is in a tough position. She wants to show she is ready and fit for the CEO position in every way so she doesn’t want to admit the baby takes a lot of time and effort and worry. Women (and especially moms) are judged in ways that men never are in the business world.

I hear you, CloudMom, I really really do hear you. However, I can’t help but think that here we are, bashing each other again, when we need to be more supportive of each other as moms and as women, whether we work outside or inside our homes. I agree with what you’ve said but I disagree that any of us should be giving this one high-powered woman so much power over our self-esteem! Let us not forget that the Marissas of the world did not create our current corporate culture (though women have been changing coporate culture now for years) but must find a way to fit into it if they want to reach its ivory towers. I myself have no interest in being the CEO of anything but some women do and bully for them. I’m guessing that in order to reach her position Marissa has had to hide her true feelings, especially the negative ones, for a long, long time. I’m guessing she’s had to “suck it up” and “walk it off” for years, and she isn’t going to stop now. She’s probably used to winning and excelling, and she probably has no idea that her baby’s current temperament and sleep habits have little to do with parenting expertise or that they will likely change as he grows. I think we need to cut her some slack, and in the process cut each other and ourselves some slack, by recognizing both her novice status as a mom and the fear that likely underlies her public statements about motherhood. Wouldn’t it be great if new moms could rely on our collective wisdom about motherhood without judgement, receive the benefit of the doubt unless we truly screw up and occasionally we mothers could close ranks like the good ole boys at the top have been known to do? Why aren’t we hollering that Marissa’s company should be ashamed of itself for offering only a few weeks of maternity leave or for not insisting that Marissa take more time off? Why aren’t we furious that Fortune rarely asks male CEOs how they are balancing work and family? Why don’t we support Marissa and her sisters at the top in telling interviewers who want to know about their lives as mothers, that such information is off limits and not relevant to the interview? I could go on for days but I think you get my point. Thanks for writing about this and for all you do.