Home » Mom » In the Wake Of Boston: Just So Proud

In the Wake Of Boston: Just So Proud

In some ways last night was a good ‘ole ordinary Friday night at my house.  At around 6 p.m., I was in “done” mode, anxiously looking at my watch waiting for the hubs to get home and help me get my five critters to bed. 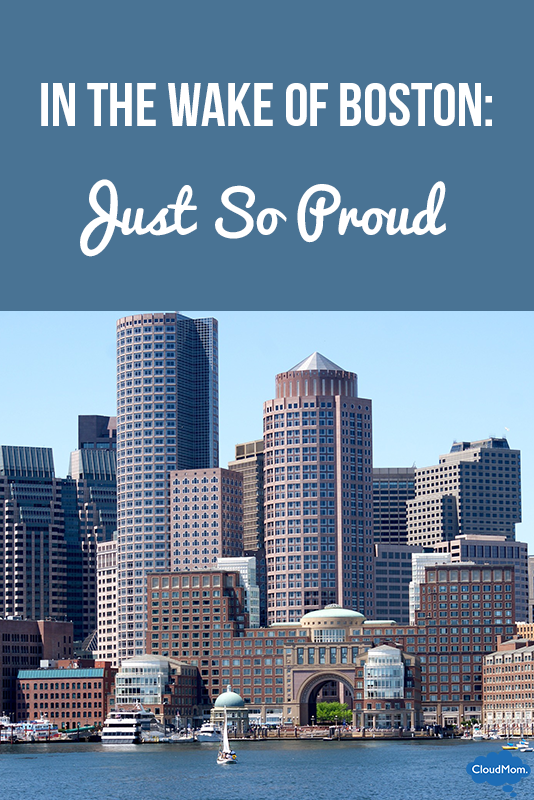 Everyone was pulling on my leg and asking for something: more ice cream, new batteries in their flashlight, to use the iPad.  I had the meat-sauce ready on the stove and the water ready to boil for our pasta, in preparation for the same dinner we’ve had since we met over 10 years ago.  The cheese was grated and sitting on the table. I was debating whether it was too early to open a bottle of wine. 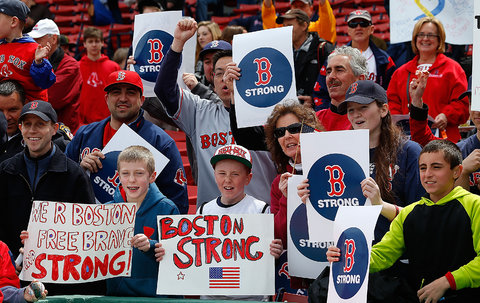 And yet it was the least ordinary, most extraordinary Friday night I’ve ever had in my life.  Because like the rest of the country and the world, come 7:30 p.m. when I got the kids in bed, I sat glued to the TV watching the most action-packed, crime scene “event” of my life.  The manhunt for Suspect #2 of the Boston Marathon bombings. I’m still in shock, and awe.  Sheer and complete awe of all the people involved in this mission and what they did.  For Boston.  For us.

Something earlier had been surprising too.  Right before bedtime, I talked to Marc and we decided to tell our oldest two sons Hedley (8) and Lachlan (7) about what was happening.  The littler kids were in bed so we sat them on our bed and explained that a horrible bombing had taken place, some people had lost their lives and many others injured, and that we were looking for answers.  We talked about how we all have to look to take care of others and make peace, and not act out of anger.  I was so shocked when they both looked at me with raised eyebrows and Lachie said to me point blank: “Mommy, we already know all about Boston.  Two bombs went off at the finish line.  They’re trying to find out who did it.”

So much for that “decision” as to whether or not to talk to my older kids about Boston … I was relieved that I had brought it up.  How strange it must have been for Hedley and Lachlan that their parents had said nothing, that we weren’t even communicating about Boston?  All week and especially during the manhunt Friday, I had been sneaking peeks at my phone from the bathroom because I didn’t want my computer scream aflame in front of my kids. I was desperate to get them to bed and light up the whole house with media coverage!

In our family, we give one third of the kids weekly allowance to someone in need.  After our talk, I suggested to Hedley and Lachlan that we give to a fund for the victims of the Boston Marathon.  We made this small donation to the One Fund Boston together, and off to bed they went.  Tiny gestures, starting small.

And then the manhunt, that boat, Watertown.  My dinner stood cold on the stove-top as I couldn’t rip myself away from the TV.  Amazing how reporters — those same noble reporters who ran right into the bombing area on the day of the Boston Marathon — stood right there, as close in as they could get, to deliver up to us the freshest information.  Their own security, secondary.

It’s overly simple, but all I can say is that I’ve never, ever, felt so proud in my entire life as I did last night of what these noble souls did.

There’ve been other moments in my life when I felt very proud.  When I carried my first baby out of the delivery room and the nurses said congratulations on your baby, I shed tears and remember saying “I’ve never felt so proud.”  Piano recitals, baseball games, camp musicals, these cherished family events have filled me with pride.  I played a role in these things.

But last night was something in a whole different league.  My mouth wide open, I watched the “helpers” as Mr. Rogers called them, plan and execute the most masterful capture I think any of us have ever seen. They’re not just helpers, Mr. Rogers, they’re heroes.

Policemen, FBI Agents, federal and state officials, reporters, politicians, so many of them, so determined, so unrelenting.  I felt shock, awe, and complete and utter admiration for all of these people, and boy, were there a lot of them.  I have no reason to feel proud because what have I done?

I’ve done nothing, but I am so proud today to be an American.

Proud of something in which I played no part at all but which is a part of me.  I think all of us Americans felt this pride last night, no matter what our differences, and our disagreements, we were totally united in protecting our people and what we are.