How Mommy Forgot a Birthday Party

Last weekend was one of those birthday party weekends in my house.  We had one Saturday morning at 10 a.m. and two on Sunday. 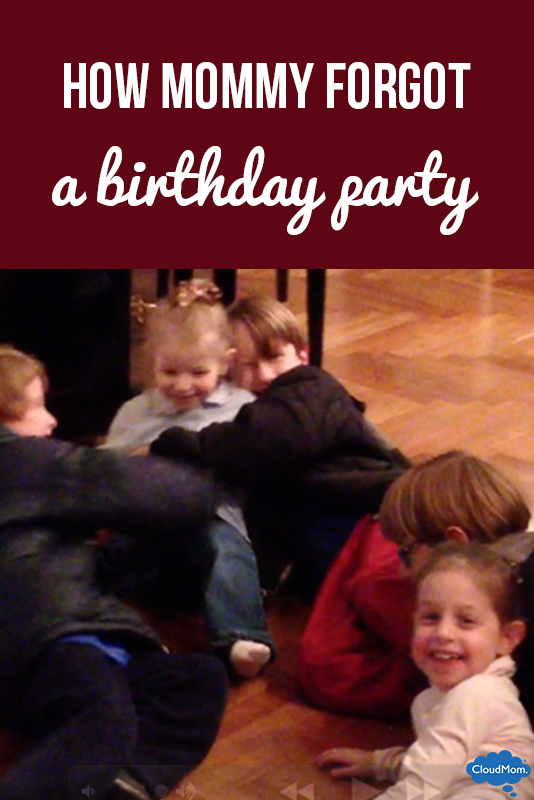 Figuring out which ones we could make was a struggle.

Little did I know that I would — INADVERTENTLY — make the decision NOT to take my kid to one of the parties we had already planned on attending because, well, because we had another one of our rough mornings.

I hadn’t been able to stop since we returned home last weekend from our trip out West and everything felt topsy-turvy and out of control. Kids weren’t signed up for spring activities.  Suitcases weren’t fully unpacked.  I still had holiday cards to open and notes to read (I personally love those family updates, as long as they don’t brag too much).  Bills, flood in the living room, flood in the bathroom. It was not our best week.

So everything’s topsy-turvy and in addition to that I can’t listen to the radio or watch TV because my husband, in essence, works for the cable company and I don’t know how to operate anything in my house because I always make HIM do it.  So the hubs recently decided to spruce up the old system with some thingie that is supposed to work through the computer, which no one can figure out, however, as soon as he has time, which he doesn’t, he is going to get it worked out.  You get it, right?

So, the morning was spinning in the wrong direction as the sweet hubs took off huffily for the gym, and then of course the kids were like ants all over everywhere, my bed, my bathroom (why do they always have to PEE in my bathroom?), tired, whining, complaining, fighting, crying, someone’s hysterical, then I’m yelling when I don’t want to and the ENERGY IS JUST BAD. I lost it.  I said something I should not have said.

OK DEEP BREATH.  OK, I usually try change the mood when this happens, when we’re in the family pit, and one way is dancing BUT I can’t do that because I CAN’T TURN THE (BLANK) MUSIC ON!!!

Hubby’s home and in the shower when I come back from changing the baby and the Rolling Stones are playing in our bedroom.  Then we all come in… and then we just dance.  Even Marielle starts dancing with her arms up. It’s so cute. We’re circling around, all smiles.  Kids have all these funny moves, no clue where from.  We’re through it.  We got past it all.  We’re up.  We’re rockin’ and we’re ready to roll. Song ends.

And then, oops it’s 11 a.m.  Lachie’s party started at 10 a.m. and it’s a movie and it’s downtown. I’m so angry at myself for getting angry at my sweet husband and destroying the household energy and losing my focus and missing the party.

So now I’m trying to figure out what to say.  I go for the truth.

“Lachie, I’m so sorry. Mommy made a mistake and we are going to be really late for the party.”  I’m ready for him to have a total freak-out. “It’s a movie and if we leave now, we are just going to make the end and then we’ll have cake and then turn right around and come home.”

I look at him.

“It’s ok, Mom. I don’t want to eat all the junky food anyway, like popcorn.”

He’s saying this with the biggest grin because he knows he is making me so happy and so relieved.  He is saying this, all of this, because he is trying to be kind.  Unbelievable. My kid is more mature than I am.

I had a temper tantrum when I couldn’t get the radio to work and my kid didn’t blink when he missed an entire birthday party with his class.

These are the moments that make all the messiness of parenting fade away and it’s all so crisp. You so clearly know WHY you have this child, WHY there is no question that the whole thing, being a parent, having a child, being united, a family, is just plain GOOD.

And that is how Mommy forgot a birthday party and realized that she needs her kids as much or more than they might need her.  KINDNESS.  HOPE.  FORGIVENESS.  DANCING.  LETTING IT GO.  GETTING RID OF THE BAD ENERGY.  I’M TRYING TO FORGIVE MYSELF AND YOU SHOULD TOO OTHER MOMMY.  ONWARDS.

Missing a party…a 10 AM party is not huge. I think your time was better spent dancing as a family.
Your Little understood. today.
Monday be prepared though, all the talk will be of the party and you will have one grumpy kid who missed all the fun.

That being said…having 3 boys I started a rule when the oldest was in Kindergarden. We do not attend anything that occurs before NOON on a sat or sun unless it is church related. PERIOD.

What mother in her right mind plans a party for 9:30 in the morning…or even 10????
Is she high?
Does she want the other moms to hate her forever?

and yes my own cousin planned an OUTSIDE party for 9:30 on a Sun. again….was she smoking? Probably. I wouldn’t know because we sent our regrets.

Your baby will be just fine. This is just one lesson in that you can’t always get what you want.

Hi Play Possum, I like your name and I’m really grateful that you read those blog — this weekend, I was so tired and we just CANCELLED one of these parties and we stayed home and everyone felt just better rested as a family. I really think it’s just too much to be running around all week and then on the weekend too, everyone needs a break!

Parties with friends are fun but quality time with family is fleeting and precious for you and the little ones.