Hello, everyone! Melissa here with an interesting new discussion about whether or not you should eat the placenta after you give birth. I came across an interesting article by Heidi Markoff on what to expect if you consider placentophagy (the technical term for eating the placenta, which I’m still working out how to pronounce correctly!) and what you should do to prepare yourself for it. Personally, I’ve never really heard about it until recently but it’s not as uncommon as you may think.  This trend has really been picking up steam as of late, especially with celebrities such as Kim Kardashian and January Jones publicly claiming that they would eat their babies’ placentas after birth. But, just because you can eat your placenta after birth, does that mean you should? This is not something that I’ve ever done, but that’s not to say that it won’t be the right choice for you. Let’s talk about the pros and cons! 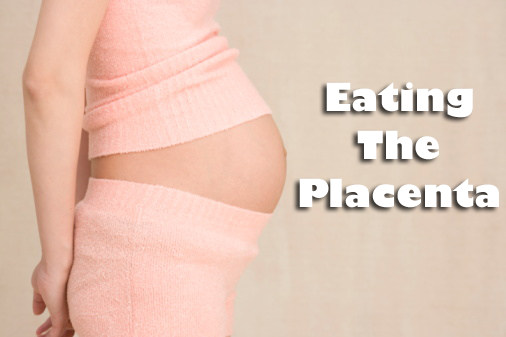 Is eating the placenta after birth worth it?

The main argument is that many mammals eat the placenta after giving birth, and humans are one of the few who don’t. Placentas are very vitamin and nutrient-rich, as this tissue holds all of the nutrients that go from mother to baby and help the fetus grow into a healthy, well-developed baby.  Vitamins B6 and B12, progesterone, and estrogen are just a few of the mineral benefits of eating a placenta, and it’s arguably a healthy way to make sure that a postpartum woman receives a lot of iron. Others also argue that it helps with breast milk production and they claim that it can help with postpartum depression, too.

I read up a lot about this subject, and luckily, I have a sister who works at Columbia University as a high-risk OB-GYN who gave me better insight. There have actually been no clinical trials that have shown without a doubt that there has been any health benefit from eating the placenta. There have been a few very small studies that did show an increase in breast milk production and pain relief as shown in rats, but no control groups were used.

This isn’t something that has been extensively studied, so it’s really up in the air as to what health benefits, if any, come from eating the placenta. This is really something that you should talk to your doctor about to see if it’s worth your while.

To hear about what steps you should take before deciding to eat the placenta, watch my video! Mamas, please weigh in and share your thoughts in the comments section below. Is this something you have done, or would consider doing? I would love to hear your stories!

Such an interesting topic and one that I have been considering on my second pregnancy. I am planning to breast feed and felt like I had a great experience the first time around but had heard from two friends great experiences with drying the placenta in capsule form and figured I would “try” it this time around. I guess it is like “insurance” for me?

I’ll be sure to get more of their opinion and also get the opinion of my doctor.

Definitely worth looking into and let me know what you find out and how it goes (and good luck with the pregnancy!). xo M

Living in Portland Oregon, placenta ingestion is relatively common. That being said, I still thought it was weird. After much thought however, my husband (of all people) talked me into having my placenta encapsulated. They basically dry it up and put it into a bunch of capsules which I then took after the baby was born. Honestly, this is the only way I would even consider ingesting my placenta, but hey to each their own. This was my first baby, but I must say that I felt pretty good afterwards. I didn’t have any baby blues and I had pretty good energy. The capsules lasted about two and a half months and I took 3-4 per day. Now that I’m no longer taking them I’m feeling a little more tired and worn out. I have spoken with some other women who also had their placentas encapsulated and they also feel like their recovery was pretty good. I would definitely recommend placenta encapsulation and plan on doing it again with any future babies.

Kristina, thanks so much for sharing and glad it was so helpful!! xo M

yes, I’ve eaten placenta twice; back in the 1980’s. I thought as a midwife, I should have that experience so I would be familiar with it, in the case any of my clients wanted to try it. (Most of the times I just buried it in my backyard.) Many have, but not until just lately. I guess I was ahead of my time. While some swear it increases milk supply, a few think it actually did the opposite. It does seem to help with the afterpains. Clients with a hx of using psychotropics, have really benefitted from ingesting their placenta, enabling them to forgo psychotropics altogether, or at least take the minimum dose. All those with a hx of post partum psychosis, did not have a reoccurrence!
The most amazing rapid-action use I have seen though, is using it to stop a pp hemorrhage. if you cut off a quarter-sized piece & place it between your gums & cheek, (like a chaw of tobacco) it has never (so far, knock on wood!) failed to staunch the flow within minutes, even faster than Pitocin!

Super interesting Marlene and glad to see you back on CloudMom. Happy Holidays to you!