Dad’s ‘Case Against Breastfeeding’ Gets It Wrong

Hello, hello to all the Mamas and Papas out there!

Breastfeeding has become such a politically-charged issue lately that I’m starting to wonder whether President Obama and Governor Romney are going to stake out sides in the “nursing wars” before Election Day — they both are scurrying after the  “women’s vote,” after all! 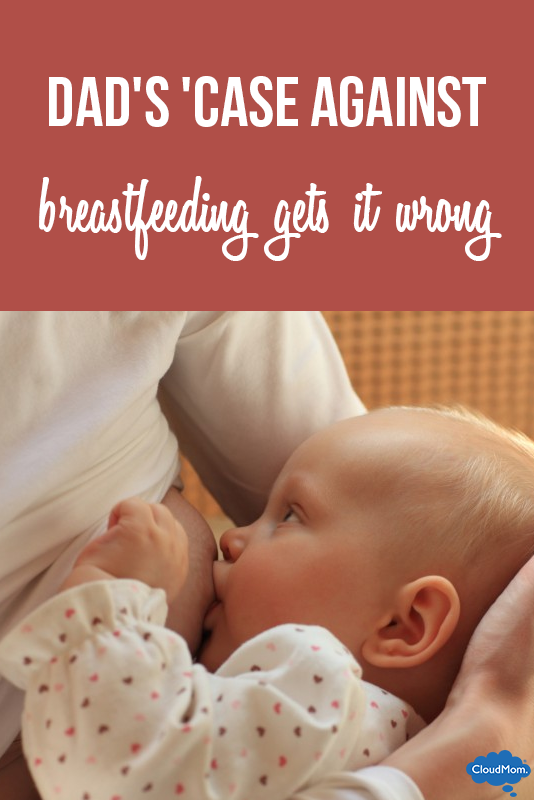 The latest round in this heated debate is coming from a dad. In a piece entitled “A Father’s Case Against Breastfeeding” in “The Atlantic,” dad Chris Kornelis argues that rather than encourage breastfeeding, as a society we should encourage “what’s healthy for the family as a whole.” And the thing we should encourage?  Formula, if that means mom and dad getting longer stints of sleep.

Kornelis’ breastfeeding vs. formula case comes in the wake of uproar after uproar over nursing. Last summer, a protest erupted after a breastfeeding mom was asked to cover up in a New Hampshire pub. An Ohio mom was removed from her post as committee chair of her son’s Cub Scout pack when she nursed during a meeting. A professor became the center of a firestorm when she brought her ill infant daughter to class and nursed her in front of students. And, in perhaps the biggest brouhaha of all, New York City Mayor Michael Bloomberg’s plan to encourage breastfeeding in hospitals by limiting access to formula samples was met by claims that he was denying women’s right to choose how to raise their kids.

As for Kornelis’ case against breastfeeding? Hmm. I appreciate that a dad is jumping in to this debate and articulating the fact that breastfeeding can be extremely challenging. Having breastfed five babies for more than six years of my life, I heartily agree that it takes dedication and sacrifice and can be a tricky thing to do. But I think Kornelis’ article as a whole — which goes way beyond the particularities of his family’s situation to take on the AAP and our society’s current promotion of breastfeeding — is misguided and flat-out irresponsible.

If the American Academy of Pediatrics determines that breastfeeding is the healthier first choice for babies and for new moms, they are certainly justified in recommending that women try to nurse. They’re the experts and they’re entitled to make a recommendation. If the docs tell us to take time away from family to go to the gym, no one complains that they’re ignoring “the healthiest option for the family.”

Secondly, formula feeding is not necessarily easier for parents. It depends on the individual case and it certainly does not guarantee that you won’t be pulling your hair out for lack of sleep when you have a newborn. If you get in the habit of nursing and it works, over time it is often actually really fast and peaceful. You also can pump and freeze milk and have your partner feed the baby so that you can get more sleep. Plenty of time for dad to bond — you don’t need formula for that. And when you’re on the go, out you go. No bottles, no formula, no contraptions to heat water. In some ways it’s more convenient. And it’s certainly cheaper.

And finally, giving formula doesn’t guarantee that you’ll have an easier baby. A lot of babies just don’t sleep too much when they’re very little. They could have trouble digesting or even colic. They could cluster feed. They could be little itsy bitsy ones who don’t take large enough quantities of milk to hold out, and therefore feed every two hours. You just don’t know. You get what you get and you DO get upset, but formula is not the miracle solution! And someone has to be there to do the feeding whether it’s day or night, which means being awake. Also, many moms don’t have the option of switching off with a partner during the night anyway, either because the partner has to sleep for work or because there isn’t a partner at all.

None of this is to say that breastfeeding is without complications and struggles, nor that it works in all cases: some women despite trying are simply not able to nurse for a variety of reasons, and far be it from me to judge. But personally speaking, breastfeeding was one of the most special, intimate and satisfying things I’ve ever done. Bonding with baby through breastfeeding is one of the most precious experiences for a mom. I would hate for women who could successfully nurse to not even try because they’ve been told it’s not worth the effort.

I actually worry that mothers who might happily learn to nurse their babies will read this piece and determine that nursing will be just too difficult to manage. We should be encouraging new moms to try to nurse and supporting them, not saying it’s too hard and discouraging them.

First off I am totally a “breast is best” lactivist. But I know that some families struggle within the household to breast feed. And in the article the father even states how hard they tried to make it work. He isnt saying that formula is the only way. We have to stop the tit for tat mentality or else no acceptance will come.

When I had my son 2.5 years ago, I had been convinced of the horrors of formula, with many women influential to me comparing it to poison. That’s the norm theses days. When my exhaustion, coupled with severe postpartum depression, coupled with absolutely no support system outside of the health “professionals” and LLL chapter who were all doing nothing but terrifying me that my child would die of SIDS if he had a drop of formula, my breastmilk still hadn’t come in when the baby was 6 weeks old, and he was below birth weight at his two week appointment. I sobbed in the baby aisle at Target when we had to buy formula, lamenting that I’d failed my son as a mother, and that I clearly wasn’t a real woman. If more people would open their minds to the possibilities of everything not going right, and we instead supported what worked best for each family individually, then I think we could foster a culture of togetherness and love.