With Halloween candy still lurking in my house, I’m trying every day to resist gobbling down the stashes of candy in my fridge.  I have a weakness for chocolate and sweets so there have definitely been days when I had much more candy than I intended to.  Yet whereas had I been chatting with my sister or Mom or a close pal I might have said “yikes, I just ate 5 Reece’s Peanut Butter Cups,” when it comes to my own kids, this subject is off limits.  I don’t talk about what I eat with my kids other than to explain that certain foods are healthy options. 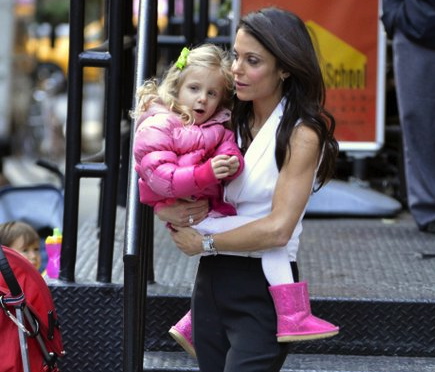 So it caught my eye the other day when Bethenny Frankel– reality TV star turned talk show host — claimed that likewise, with her daughter Bryn, she avoids any mention of dieting.

I say huge thumbs up, Bethenny.  I hadn’t really thought about it so concretely before, but I realized when reading your parenting advice that I’m instinctively doing the same thing with my kids.

Why have I been doing this?  I guess I agree with Bethenny that teaching our kids that certain foods are forbidden and others good is the perfect way to mess up their relationship with food.  I don’t want them to feel guilty when they eat something that’s yummy, nor to think that certain foods aren’t allowed.

Meanwhile, I do value the importance of teaching kids about nutrition.  So I encourage healthy options and place limits on sweets, saying to them for example, two Halloween candies after school .  But I don’t say that eating more candies than this is “bad.”

Am I getting it right?  I hope so.  It’s been largely a “follow your instinct” kind of thing for me as a mom.

Why We Play Down Physical Attributes

Avoiding any mention of dieting is part of a larger attitude that my husband and I espouse when it comes to talking to our kids about physical appearance.  We’ve made a conscious decision to not talk to any of our children — girls and boys — about our own physical appearance and to pretty much avoid the topic when it comes to other people.  I spent years of my life saying “oh, I look terrible” but I rarely say such a thing to my kids.  Somedays I feel that way so I have to restrain myself!

Notice I say boys and girls.  You know why?  One day, one of my sons said another kid at camp had called him fat.  Sort of funny since he’s a bean pole. In this case, saying my son was fat was an attempt to bring him down, to make him feel bad about himself.  It worked.

So since then I’ve pretty much decided that no one in my house would be described according to their physical appearance, and that we wouldn’t react to other people based on how they look but instead based on who they are, what they say and what they do.  It all sounds a bit holier than now, but this is the pattern we’ve set and we’ve just sort of sticked to it.

When we walk along the street, I never say anything about anyone else being pretty, thin, tall, short, fat, skinny, young or old, handsome nor beautiful.

I basically never talk about physical appearance with my kids at all.

This isn’t to say that I don’t care about my own physical appearance nor that of my kids.  I try to dress them decently well.  I braid the girls hair and most days, they go to school looking nice (or so I hope!).  On occasion, I will say “you look so nice”, and I confess that I have told my girls they look pretty.  But it’s not a regular thing by any means nor a focus of attention.

I guess I just don’t want them thinking that someone is more or less valuable because of how they look.

I don’t believe in that and I don’t want my kids to either.  I don’t want them to see other people this way, because it’s so limiting and it’s so damaging and hurtful to judge yourself this way.

Am I going too far?  Am I getting it right?  Weigh in mamas with how you are approaching these issues with your kids!  Would love to hear from you guys!