Hello all.  One of the biggest issues facing parents today is whether or not to vaccinate a child .  Yesterday I mentioned on our Facebook page that I had given my children the flu shot (and that one of them had an inflamed upper arm) and I quickly learned that many mothers active on our page are opting not to give the flu shot. 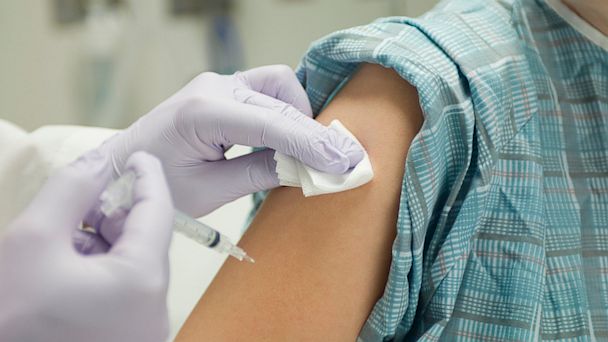 Has your family chosen to vaccinate your children?  Weigh in below.

My family has chosen to follow our doctor’s recommended vaccination schedule with our children and we do get the flu shot.  We came to this decision after consulting with our doctor and family members as well who are doctors.

Realizing that all parents don’t do or see things the same way, I nonetheless think that  we all have to be aware of the facts surrounding these issues.

On Monday of this week, ABC News reported that in 2010, an pertussis outbreak, also known as the whooping cough, in California infected 9,120 people and was linked to 10 infant deaths. A new study published in the journal, Pediatrics confirms that this whooping cough outbreak was a result of parents deciding not to vaccinate their children.

The pertussis or whooping cough vaccine is given as part of the DTaP or Diptheria, Tetanus and Pertussis.  The CDC recommends that children receive the DTaP at five different times: at 2 months, 4 months, 6 months, again at 15-18 months, and at 4-6 years of age.

The ABC article also explained that according to the CDC, about half of the infants less than 1 year old who get pertussis will be hospitalized.  And that of those hospitalized, one or two out of 100 will die.

Please share your thoughts and experiences with the DTaP and vaccines generally in the comments and thank you so much for coming to CloudMom.

We are a family that has chose to vaccinate our two boys but we do not follow the CDC recommended schedule. We do one shot at a time and we space them out about two weeks apart. We also had a console with a holistic doctor and they are both on a daily probiotic, they take a herbal supplement of Grow and Thrive a week before the shot and a week after the shot. For our 1 year old we avoid fruit the day before the shot and a day after and no meat the week of the shot. This is what works for our family. There is a great article that a holistic doctor wrote. Take the time to read it, might make you think twice when someone says there was an outbreak because of un-vaccinated kids.
http://holisticsquid.com/was-the-whooping-cough-epidemics-caused-by-unvaccinated-kids/

Here is another website article that points out how much money vaccines make the Big Pharma company’s
http://www.thehealthyhomeeconomist.com/survey-results-are-unvaccinated-children-healthier/

Hi there — I read the first article, very interesting. It seems weird that the CDC person would say that the increase in pertussis is not from a decrease in people vaccinating? Thanks for sharing.

I let my girl get normal vaccinated. She just haven’t had the flu shot yet, simply because she never have been sick or had a bad fever and think she could get over a flu easily. (she is 21 month) We also don’t have any other kids and she is also not in daycare… yet. So since she probably will be going to daycare when she turns two in December, I want her to have it and I probably will go get it also. Everyone has to know it for himself and to educate yourself and not just believe everything what you hear. I’ve never had a flu shot before but I grew up in Germany.