Hello, moms and dads, and welcome to Week 10 with your baby, and week 10 with my baby, Bracey. We have been struggling with Bracey’s weight since we took him home from the NICU one month ago. Bracey was born at just 30 weeks gestation (when I was 30 weeks pregnant) 10 weeks ago and today is actually his original due date. Go figure. I feel as if we’ve lived a million lifetimes already with Bracey and he’s such a gift. Like many premies, though, he gets tired and we’re trying to strike a balance between encouraging him to breastfeed and getting him the food intake he needs. Because I’m being encouraged by my pediatrician to give so many bottles, nipple confusion, which I talked about in detail last week, is still a major challenge for me. I am going to quickly walk through the milestones for a full term baby at 10 weeks and give you guys my breastfeeding and bottle feeding schedules — which I swear by and put up each week for your convenience because this is your pathway to an orderly and restful life with your baby. Then, I’ll share some thoughts on premie babies and give you an update regarding Bracey. Here goes! 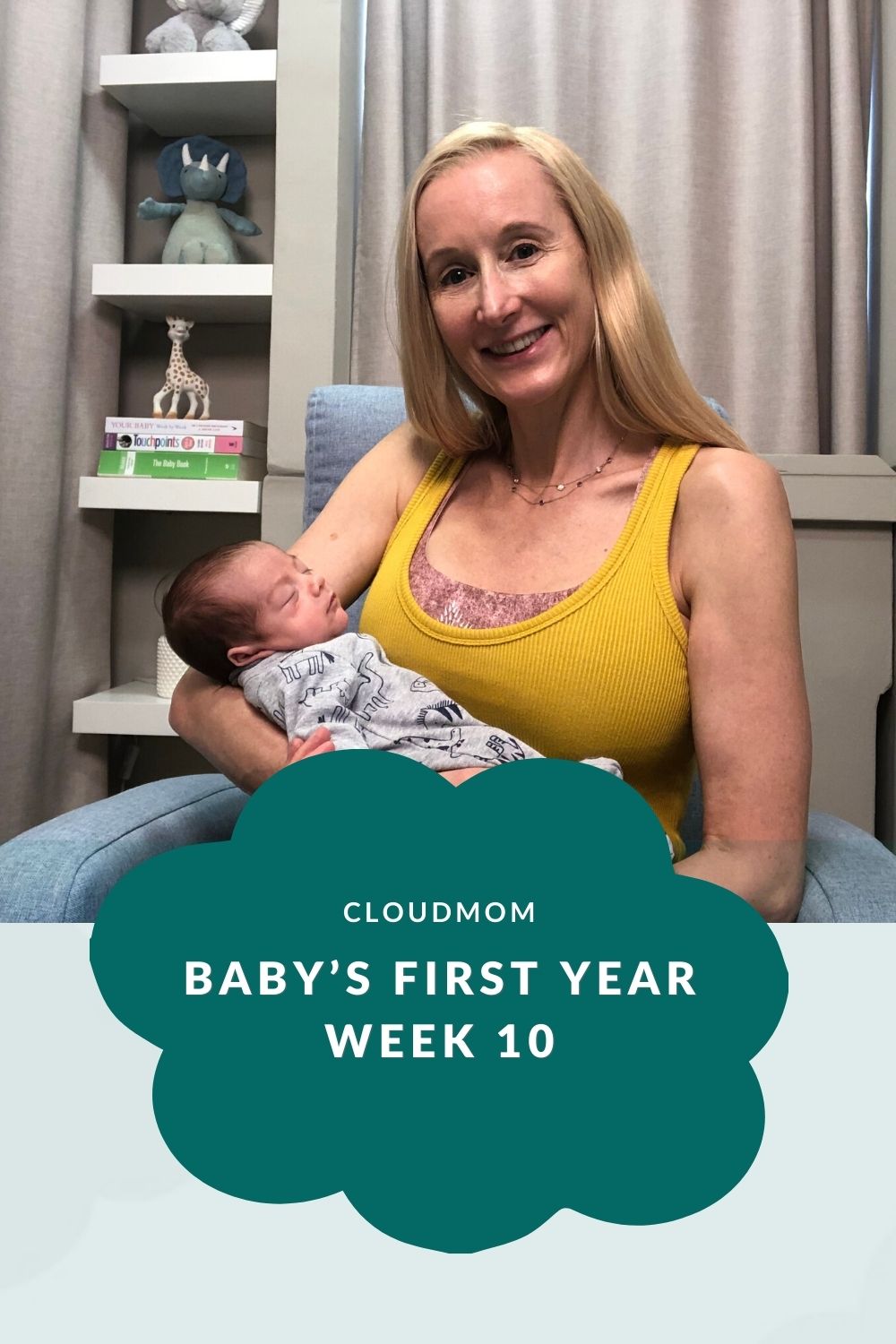 Growth and Development of a 10 Week Old Baby

At 10 weeks old, your baby has likely gained approximately 3.1-4.4 pounds from birth (1.4 – 2 kilos) and he’s grown about 1.25-2.5 inches or approximately 3.2-6.3 centimeters. By this point, though, if you had a full term baby, you likely are not watching every ounce the way I am and are into a routine with your baby, awaiting your next appointment with the pediatrician in two weeks. Your pediatrician will be measuring your baby’s weight and growth against similarly aged babies and looking at your baby’s individual growth trajectory.

How should a 10-week-old baby be developing?

At 10 weeks, your baby likely has rounded out and appears chubbier and fuller in the face, arms and legs. Have fun squeezing your baby! Your baby also likely has made the connection between their movements and eyes and realizes that when they reach for things, they can obtain them. So get ready for a lot of grabbing! This can include your hair! Your baby should be able to hold their head up more easily when they are on their stomach or being carried upright by you, although still for only a few moments at a time, for sure.

As I’ve discussed in prior weeks, you should be talking, singing, laughing and interacting with your baby as much as possible. Your baby should be inching his way towards an hour of Tummy Time per day. Try not to keep your baby for long stints in a bouncer or bouncy seat, car seat or swing since this is not optimal for their physical development and can cause flat head syndrome. Try to play classical music when you are with your baby. I’ve noticed that it soothes Bracey when he is fussy.

How do I Prevent Sudden Infant Death Syndrome (SIDS)

The American Academy of Pediatrics recommends that all babies be put to sleep on their backs. Once babies have the strength to turn over, however, they can flip on their own over to their stomachs. The AAP also recommends that blankets, burp cloths, bumpers or stuffed animals that could potentially end up nestled near your baby’s nose or mouth and obstruct their breathing be kept out of the crib. Most SIDS cases happen to babies aged 2-4 months. So you want to be even more cautious at this point and to keep your baby’s crib bare. Your baby might look a bit sad and lonely in a big crib but so be it. To keep your baby warm, layer their clothing, putting on a short-sleeved onesie and then a warm pajama on top and a hat.

Breastfeeding and Sleeping Schedule for an 10 Week Old Baby

Ladies and gents, we are still following the every three hour feeding schedule but I would definitely check with your doctor to see if you can move to an every 3.5 hour feeding schedule during the day. Most likely, your doctor has been telling you for a while that you do not need to wake up your baby at night to feed. Hopefully, this has entailed longer stretches of sleep at night for you! Note that you likely have dropped a feeding, which is why there are only now seven feeds. Hooray!

If your baby wakes up earlier that these scheduled feeding times or wants to eat earlier than anticipated, by all means, feed them and modify the schedule accordingly. Remember that this schedule is just a guideline to keep you on track. When you don’t keep track you can let the baby sleep for too long and then can go more than three hours between feeds. Your baby needs a certain amount of calories a day. You want those to be consumed to the extent possible during the daytime not during the night. I know the schedule by heart at this point and I am sure that if you have been watching my videos, you do too. Right?

I’m crossing my fingers for you that between 10pm and 6-7am your baby only wakes up once. By this point, some of my babies did a 4-5 hour stretch at night.

When do Babies Start to Sleep Through the Night

During the course of your baby’s first year, you’ll see a gradual progression with feedings. Your baby will increase the amount of milk they consume per feeding. By six months, your baby will be eating solids and will drop the 2-3am feed. By around 9 months, they will drop 10pm top-off feed. At that point, your baby will be sleeping for a good 10-11 hours at night. Now, not all babies do this and for some, the longest stretch they will ever do will be eight or so hours. But don’t fear: this is the road you are on and you will get there. It takes patience and perseverance and you got this, mama!

You might find at this point that continuing to pump for 5-10 minutes after each feed is a challenge because real life has kicked in and when you are finished with a nursing session, you need to hurry and take care of work or family matters. I know that is the case with me. Try, however, to continue to pump after the first morning feed and after the second morning or mid-day feed, when you likely will have excess milk. Try also to pump after the late afternoon feed when you likely will have less milk since when this happens, you want to encourage your breasts to produce more. My first OB used to set her alarm for 3am when she had a ton of milk (due to hormonal changes, many women in fact do produce a lot of milk during the early morning hours) and pump then. So by all means if you have the energy for that (and it works in terms of when your baby eats at night) try that too. So with all that said, let me suggest this as a Breast Pumping Schedule!

By only pumping for 1-15 minutes during this 2-3am session, I don’t think you run the risk of not having enough milk whenever your baby does wake up since most breastfeeding women do not struggle with milk supply at this point in the day.

I have continued to struggle and research this week regarding nipple confusion. On Wednesday, I took Bracey to see the pediatrician and he had only gained 100 grams from the prior week. I actually think the accurate gain was 200 grams since the prior week I had stuffed a bottle of 100 ml of breastmilk into him before he was weighed. Now, the doctor was ok but not thrilled. On the one hand, he told me that seven feedings a day was fine and that I did not need to wake Bracey up every three hours to feed. But on the other, he told me he wanted to see a weight gain of 150 grams this week, so the pressure is still on.

I purchased an infant scale on Amazon in the U.S. and Paulus is actually bringing this to me on Monday night. One father whose blog I read recounted the same struggle I have had with his second son Lucas who was born prematurely and spent alot of time in the NICU. When Lucas came home, his parents were advised to give him four bottle a day. When the baby was due to get the breast, he would only stay on the breast for 8-12 minutes before becoming frustrated and breaking out of the latch. This is what is happening to me. I try to be patient — as I talked about last week — but I find Bracey starting and stopping. Sometimes, he’s asleep and I have to continue to wake him up to get him to take a bit more. Sometimes, he’s awake and stops sucking. The most frustrating thing – and this happened last night at 5am after I had nursed him for one hour — is that after nearly every breastfeeding session, when I give him the bottle the doctor is requiring he then sucks down 100ml! I’m sad and frustrated over this but I am not giving up. I am going to keep going with the three-four supplemental bottles but if my doctor says two bottles are ok on Wednesday, I am shifting down to that. And I am gong to weigh Bracey after breastfeeding sessions to see how much he is drinking. In baby Lucas’ case, he actually was getting a significant amount of breastmilk quickly from the breast. Fingers crossed that Bracey is doing the same without my realizing it. If you have tips for me, please comment below! I need the help.

This week, we continued to try to strike a balance between getting Bracey’s weight up and encouraging him to breastfeed. He was weighed this past Wednesday and had only gained 100 grams since the prior week, weighing in at 1.965 kilos. Yesterday, I brought Bracey to the public hospital here for his first set of Week 8 vaccines. He did not get rotavirus (I have to go to my pediatrician for that) but he did get the combined: diphtheria, Hep B, Hib, polio, tetanus, and pertussis or whooping cough. The doctors in the NICU have also advised that everyone in my family get the flu shot and Paulus and I had the whooping cough vaccine while we were in the NICU.

Soothing a Baby who has had his Vaccination Shots

Yesterday was a very long and difficult day since Bracey had his shots and wanted to be held all day and refused to go in his crib. I gave him one .5ml dose of Paracetamol as prescribed by the doctor because he was so irritable and would not sleep. So guess who did not get a lot of work done and could not even find 5 minutes to stretch out and do a few yoga poses? But it’s all good. We are going to stay the course. We love our little nugget for his highs and lows and I know you love yours too. See you back here next week for Week 11. 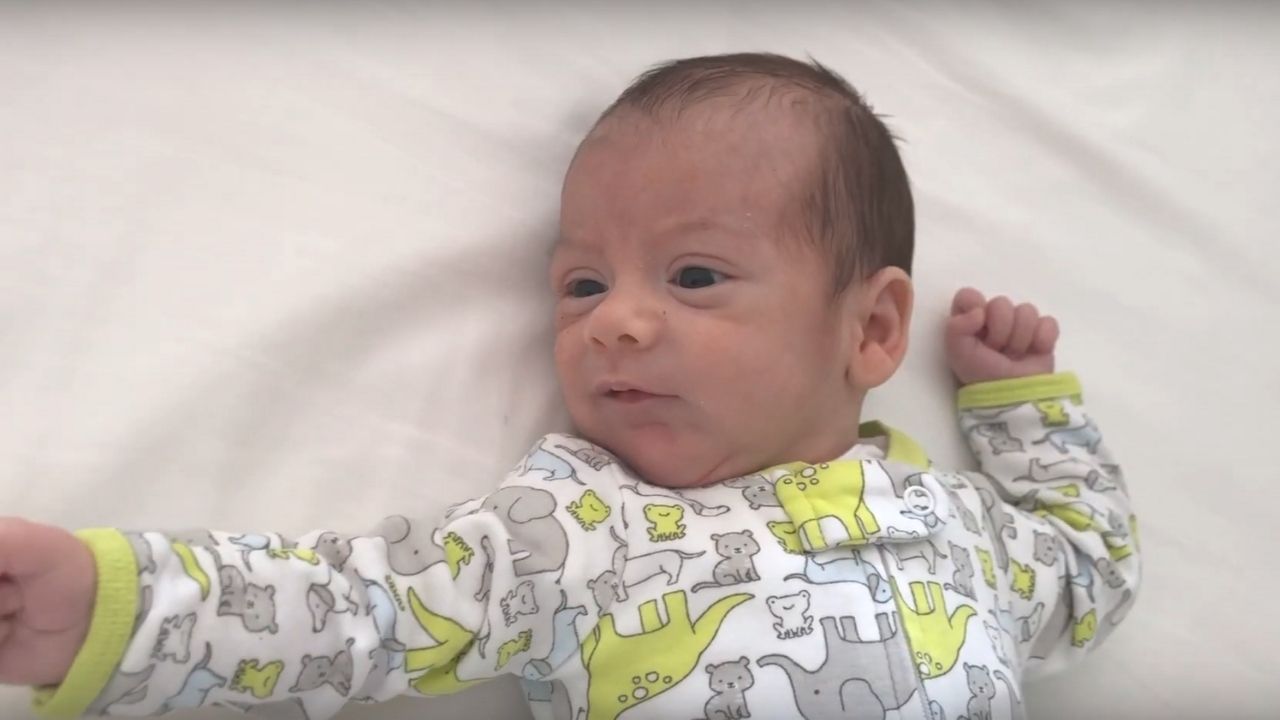 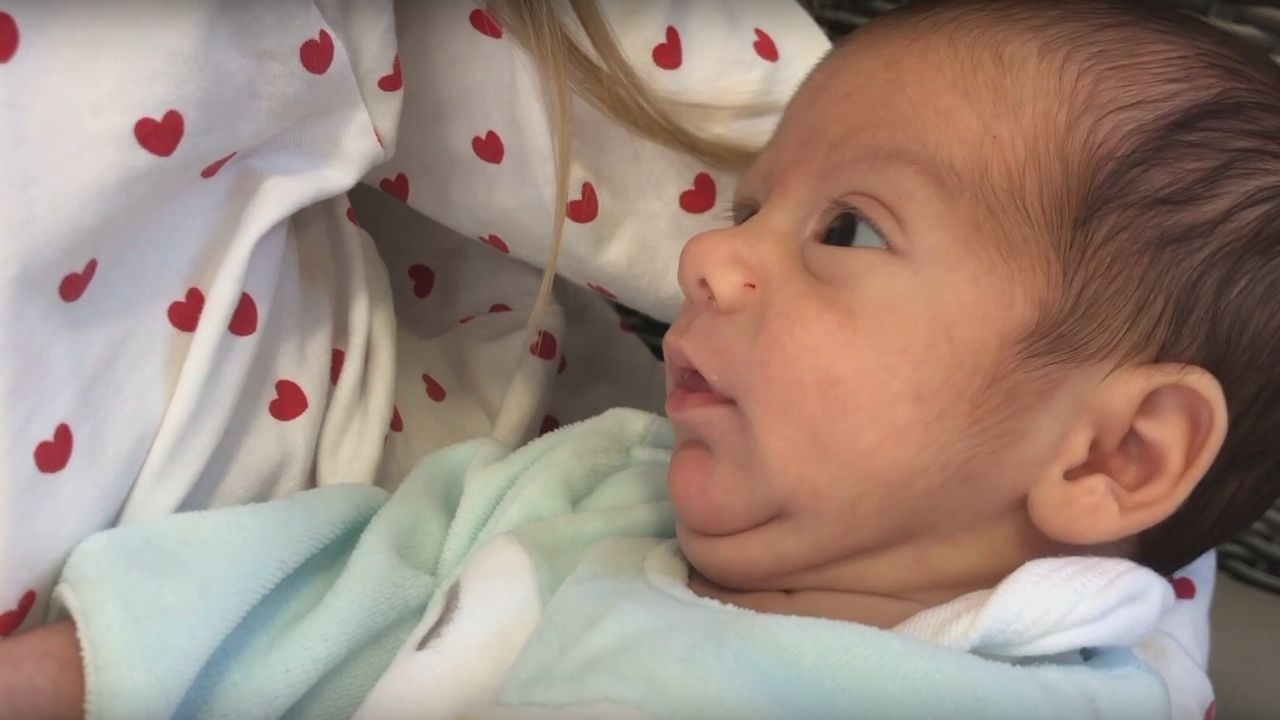