Earlier this week I posted a video about baby circumcision and shared my own experience with deciding to circumcise my three boys. The post generated a lot of talk in our CloudMom community and the comments really got me thinking about the circumcision question in a new light, so I wanted to share some of the responses here. 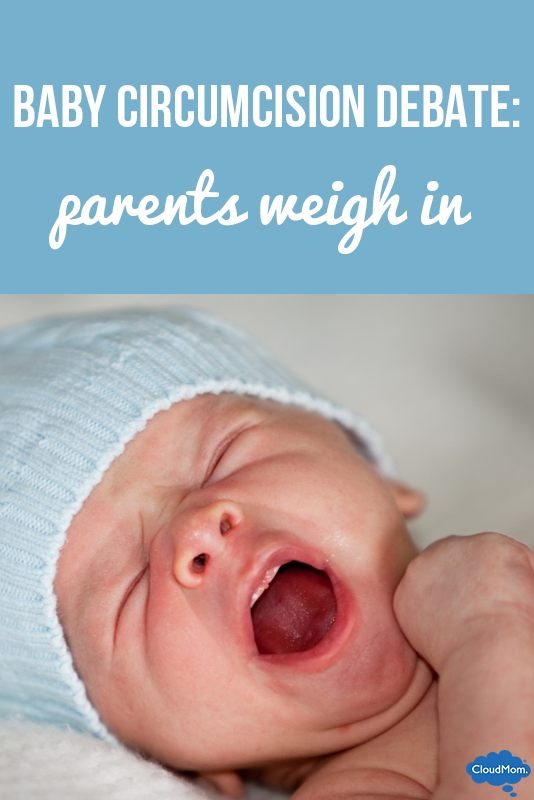 A few moms echoed two sentiments that were part of our decision to circumcise: a belief that it’s healthier and easier to clean and a desire for their boys to look like their husbands.

“Although we don’t have boys (yet), my husband and I have discussed the topic and came to an agreement,” Amanda wrote. “We will circumcise our boys mainly because my husband is! It’s also more sanitary and easier to clean. Hopefully we’ll have a boy someday!”

“Much healthier and I wanted my boys to look like my husband,” wrote Lisa.

Intactivists Explain Decision Not to Circumcise

The rate of circumcision has fallen in the U.S. from 90 percent in 1970 to 55 percent today, and many commenters also shared their reasons for keeping their boys uncircumcised or “intact.”

“No way would I get it done for my boys,” wrote Stephanie.  “They can have it done later in adulthood if their foreskin is a problem.”

“My husband is uncircumcised,” wrote Mrs. Coney. “He wonders what it would be like to be ‘cut,’ but I’m glad he isn’t. He’s NEVER had an infection down there. …If you properly care for a natural penis, you won’t have problems. I actually left the decision to cut up to my husband. We’re expecting our first son in April. As a male, my hubby can far better understand this issue than I can.”

One viewer from New Zealand with the screen name “alnot” posted a lengthy comment about his reasons for being an “intactivist” who opposes routine infant circumcision (RIC).

He said he is uncircumcised and expressed concern about “ineffective anesthesia” causing pain for the infant, and shared his belief that “Circumcision is a material alteration of the most sexual part of the male body. …There is ample anecdotal evidence that RIC can have adverse sexual consequences, for one of both of an adult man and his spouse.”

He also cited low circumcision rates in other countries including New Zealand, Australia, Canada and across Europe, adding “There is no evidence in any of these countries that the natural penis is prone to medical problems.”

“Most parents will base their decision on perceived cosmetic conformity, and on sexual urban myths,” he wrote. “Circumcision is not healthier if boys and men bathe daily, and abstain from grossly irresponsible sexual acts. The way forward is to add condoms, not subtract foreskins.”

“We intactivists are not against circumcision freely chosen by an informed adult, for reasons religious, medical or sexual. We are against circumcision imposed on a child by his parents, and performed by a medical profession that is insufficiently informed and reflective, and that fails to employ adequate pain management.”

“I had my first son circumcised without much thought put into it,” wrote Marlene, a mother and grandmother.  “Then when I was in nursing school, I saw circumcisions; like you said, it was horrendous! So, since then, I have done much soul and internet searching. …There is no way I could do that to another son, now that I was fully informed of both sides. I did have two more sons. We left them intact. When they were old enough to ask why they looked different from their big brother, I told them as simply and straightforward as I could.”

I don’t plan on having any more babies, but these comments really gave me a lot to think about! So what about you? Circumcision – yes or no?

My first son was circumcised, no problem. The second, not so much. I already had reservations about doing it becuase I had done quite a bit of research in between son #1 being born and #2 and found that it wasn’t necessary AT ALL. My husband still wanted to do it so I agreed. During his first diaper change he started bleeding A LOT! I hemorrhaged after his birth really bad so it had already been a traumatic couple of days. That was the last straw for me! I swore if we had any more children I wouldn’t circumcise them! It was absolutely not worth it. My sweet, tiny, precious baby was covered in blood from his shoulders to his toes…all for a look. I felt like the worst parent ever. It’s the ONLY time in the 2 years I’ve been a parent that I regretted a decision I had made.

Carly, this is such a terrible story, what happened to cause that bleeding? Of course it wasn’t your fault, do not blame yourself! Thank you for sharing this…

The foreskin isn’t just a useless floppy bit of skin. Scientists state that the foreskin is analogous to the female clitoris in that it contains many sensitive nerve endings which aid in male pleasure. In a woman’s genitals the clitoris has the largest concentration of nerve endings 8,000 with 3,000 in the virginal opening. In men the foreskin has the largest concentration of nerve endings 20,000 with only 4,000 in the glans (head).Study’s have found that uncircumcised men have 4 times the feeling that circumcised men do. Not only do you lose the feeling from the 20,000 nerve endings. The head becomes less sensitive as well http://www.circumstitions.com/Sexuality.html In virtually all European countries the HIV rates are way LOWER than in the United States. And other STD occur at either lower or similar rates as well. Ditto for China, Japan, Australia, and other non-circumcising countries throughout the world.Urinary track infection in males are less then 1.% .020 circumcised .024 uncircumcised and penile cancer are the same as the United States 1 in 100,000 research has shown that in societies where good healthcare and high hygiene standards prevail there are hardly any medical benefits from circumcision. When it comes to preventing STD’s, for instance, a much more effective approach is the simple use of condoms. It should be noted that Prof. Morten Frisch’s study, which was questioned by Frank, has incorporated a number of measures to ensure the statistical validity of the data as well as peer review, which is of course the very reason it was deemed fit to be published in a respectable international medical journal in the first place.
Prof. Frisch’s study suggests that a significantly larger number of circumcised men report sexual problems than do their intact peers. In addition, women in relationships with circumcised males report sexual problems more frequently than do women with intact partners.