My husband Marc and I are celebrating our 10th anniversary next week.  10 years in, with five young children under our belts, here are 10 things about him as a Dad that we all cherish. 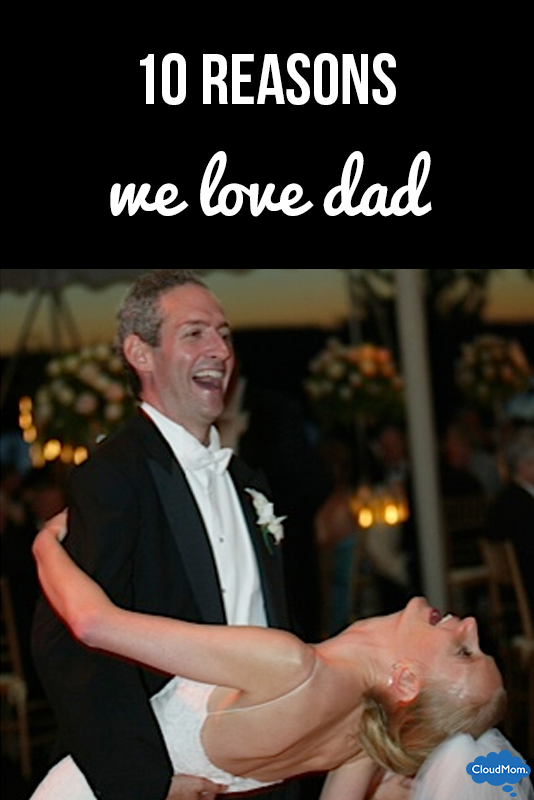 1)   Music.  Marc’s brought great music into the kids lives.  Bob Dylan, Dan Zanes, Dinosaur Jr. and lately the Beatles. Eleanor Rigby, The Fool on the Hill, I love watching the kids’ faces as they sing along, imagining the characters described in these songs.

2)   Adventures.  Marc often takes the whole tribe out on Saturdays so that Mommy can catch her breath.  He really investigates and explores new things in NYC.  They’ve gone to the Queens Hall of Science several times, the New York Historical Society, Symphony Space, the Guggenheim Museum, and even caught some old movies.  I only regret that I missed out a lot by taking my “Mommy downtime.” 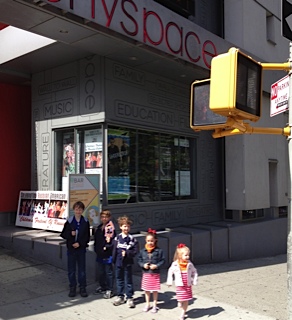 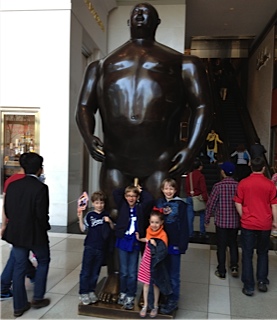 3) Photos. Marc’s our resident photographer and if anything, he takes too many great photos.  Only trouble is he’s not as wedded to printing photos as he is to taking them, so we’re still cobbling together our 2005 album!

4) News.  He’s also our news briefer so during morning breakfast, he fills the kids in on what’s happening in the world.   He loves history too so he’s gotten the boys hooked on WWII.  Mommy does get annoyed when she catches him on his iPhone during breakfast, which he justifies as fact-finding!

6) He sports a great email signature line.  Whenever I get an email from my sweetie, he signs it xoxoxo M.  Coming from a guy, I think this is pretty awesome.

7) He’s a great card writer.  Marc is great at cards and writes a nice paragraph straight from the heart.  I’ve got every card saved in a special place.

8) He’s patient.  Marc is SO much more patient than me.  He waits hours (poor thing) for lunches and dinners at times, and never complains.  Only exception is when we are travelling to the airport when his patience flies off somewhere and he likes to arrive 4 hours early!  This is one of those times when we’re sure to fight!

9) He’s Not Fussy.  Marc is the least fussy person I know.  Although he loves a great cup of coffee, if you gave him a crappy one, he wouldn’t blink.  He’s never sent anything back in a restaurant, and he’s never complained over the 10 years of getting the same lunches and dinners –often overcooked if not burnt.  When we first met, I could never decide what to order at a restaurant and he said, “you know what, it actually doesn’t really matter.  It’s all good and the perfect is the enemy of the good because in trying to find the perfect thing, you don’t enjoy as much.”  Words I’ve learned more and more to live by.

10) He’s a great hugger.  Marc’s an affectionate, warm and loving dad who’s always hugging the kids.  I get annoyed when they have to get up from eating to have a hugging session, but nevertheless, it totally rocks! 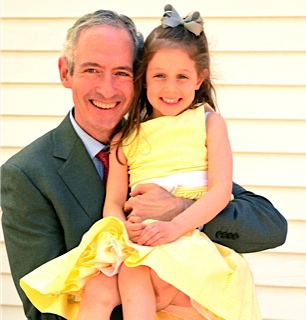 He’s not all perfect!  His swaddling skills went south after Hedley, he relies on a weekend afternoon nap and snores so loudly it’s hard to work in the same room, and he isn’t the best enforcer of chores and piano, nor the best camp form filler-outer.  But I wouldn’t trade one sweet day with my sweetie.  He’s my soul mate, and my bestest friend, and just a joy to be with.  And — especially when I manage to get him out of those old, oversized shirts — pretty cute to boot!

Honey, thank you for joining me on this zany, invigorating adventure that is a life with kids.  If I was a better wife, I’d have a picture of you with all five kids during the past 18 months, but since I’m not and we don’t, I’ll have to use this photo from Marielle’s 1st birthday in December of 2011!  Forgive me! 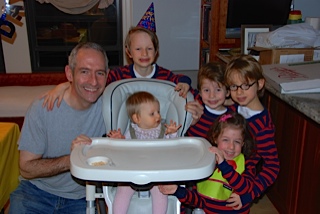